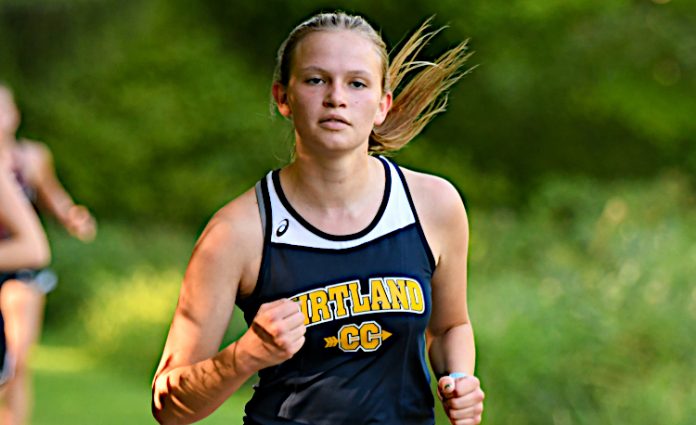 The Hornets placed fifth at the Division III Madison District meet and will run at the Boardman Regional next weekend. Kirtland last qualified for the regional meet in back-to-back seasons in 2009-2010.

“Two of our major goals coming into this season were to win the conference and qualify to regionals as a team to make each a back-to-back experience,” said Kirtland coach J.P. Moran. “We lost four seniors from last year and two were in the Top 5 at districts, so we knew it was a tall order. The girls responded magnificently today with many season and/or lifetime personal bests. We have really raced well the last two weeks and it’s been great.”

Greenlee, who placed 84th at the state meet as a junior last season, finished in 21:28, a season PR.

“I am satisfied with it knowing one of my last races was a pretty good one, and good enough to do my part in advancing the team,” Greenlee said. “It was unreal knowing we made it out to regionals as a team. It was exciting last year, but being able to replicate it with losing two seniors last year and not having Sylvia (Vosicky), one of our top girls, just shows how hard all our girls ran and wanted to make it out for the team, and I hope Kirtland will continue to build and become a threat in our district.”

For Greenlee and the Hornets, next week’s regional championships could be the end of the road, but they’re going to do everything they can to try and extend their season by one more week.

“I am going to approach the regional meet just hoping to have fun running with my girls for the last time, no matter the result,” Greenlee said.

Ian Borthwick paced the Hornets with a time of 19:11, good for 59th place.