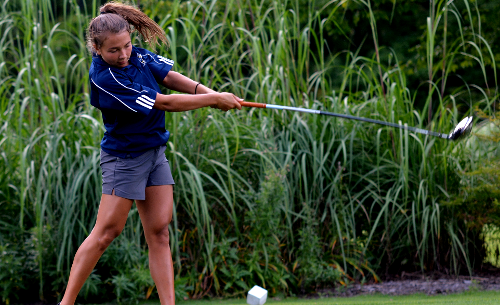 Kirtland senior Isabel Anness spent the past two years playing on the boys’ varsity team but on Tuesday she punched her ticket to districts with a fifth-place finish at the Division II girls’ sectional tournament at Punderson Golf Course.

Anness finished with a 91.

“She drove the ball great today but was a little off with her putting,” said Kirtland coach Al Canitia. After 17 holes in 90 degrees, she hit a great tee shot on the difficult ninth hole to about 20 feet and made a great par.”

The top five finish came as a pleasant surprise to Anness.

“I wasn’t really expecting to make it out, but playing with the girls I knew I would have a good chance,” she said. “As a senior, I’m definitely happy to be ending my golf career on a high note. I definitely had struggles on both the front and back nine, especially with putting, but I just focused on playing one hole at a time to try to keep myself in it.”

Spending two years on the boys’ varsity team certainly helped Anness to improve her game and to prepare her for the postseason playing against the girls.

“It’s always a lot different playing with the boys,” she said. “Playing longer courses has helped with hitting my longer clubs to get my scores down and to be more competitive with the guys.”

Anness hopes to extend her season by another week, but regardless of what happens at the Canton District, she’s satisfied with how her season played out.

“I hope to play well next week, for sure, but either way, I believe I had a good season,” she said.

Sophomores Cecilia Anness and Jessica Kelly also competed. Anness finished tied for 15th with a 99 and Kelly carded a 126.