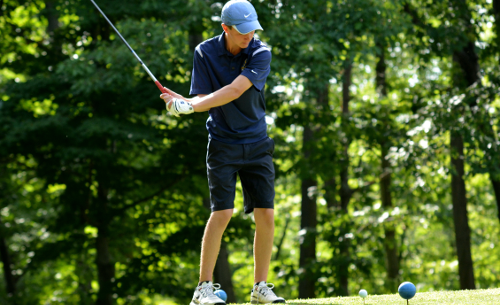 Kirtland’s Michael Schnur picks up where he left off

MADISON—Kirtland’s Michael Schnur picked up right where he left off last season.

As a freshman in 2014, Schnur was named MVP of the Chagrin Valley Conference. He opened his sophomore season by shooting 77 to win medalist honors at the 2015 CVC preseason tournament at Powderhorn Golf Course on Thursday.

“This is what I’ve come to expect from Michael,” said Kirtland coach Greg Cosimi. “That’s not to say I’m taking him for granted, I’m just saying he has written this story of success with his high school golf career and I think what he is looking forward to is sort of improving upon his district performance of last season and really pointing toward the post-season.”

The Hornets finished second to Hawken in the Valley Division. The Hawks finished with a total of 346 strokes to 352 for the Hornets.

Hawken had three golfers finish among the top six in the division.

“I’m pretty happy,” Cosimi said. “The course played really tough today. It was difficult. The conditions were dry and the ball was rolling. I thought that against Independence and Berkshire we fared very well. Hawken has traditionally been in the bigger division and they played like it. They played well. To have three scores in the 80s and mid-90s, that was pretty good.”

Michael Knezevic also had a big day for the Hornets.

Knezevic, who played his best golf in the post-season last year, fired an 86 to finish seventh in the Valley.

“Mike’s golf career is sort of an interesting story,” Cosimi said. “He really struggled when he was a freshman and then last year he had a pretty big slice and he really came around to the low 40s toward the end of the year and when we really ended it he came through with a 91 at our sectional. To tell you the truth, without him I don’t know if the result would have been the same. He has really stepped up in big tournaments for us. (On Thursday), I thought he played his back 9 even 40 and that was pretty gutsy considering his other nine wasn’t so great.”

“Brian will live to fight another day,” Cosimi said. “Danny played an OK round for him and Jack and Adam are very new. That was their first competition so I kind of expect a little bit more from them as they get more experience.”

The Hornets travel to Wickliffe on Monday.