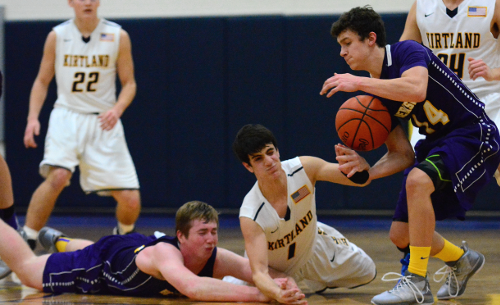 KIRTLAND—Kirtland overcame an early deficit then faded down the stretch in a 65-53 loss to visiting Berkshire on Monday in a key Chagrin Valley Conference Valley Division showdown.

The Badgers, who improved to 6-7 overall and 3-3 in league play, jumped out to a 13-4 first quarter lead then held off the Hornets in the second half to pick up the road win.

“We just didn’t come out with the right energy tonight for us to win this basketball game,” said Kirtland coach Nick Gallo. “We’re trying to go up and pressure them and we’re just walking the spots. We’ve got to be better than that. For us to come out and give up 17 points in the first quarter is just unacceptable for us.”

Kirtland, which dropped to 5-5 overall and 1-3 in league play, battled back to trail the Hornets, 17-10 after the first quarter.

Matt Grazia then hit a pair of 3-pointers to pull the Hornets to within 26-22 midway through the second. A Sam Skiljan layup and a steal and score by Grazia a minute later gave the Hornets their first lead of the game, 28-26.

A 23-point second quarter gave the Hornets a 33-32 lead at halftime.

Kirtland’s second quarter pace cost them in the second half. The Badgers outscored the Hornets, 15-11, in the third quarter and 18-9 in the fourth to pull away.

“I thought them coming out in zone would give us an opportunity to get some open looks and get our feet underneath us, “Gallo said. “I felt good when we came out but we’ve just got to knock down shots and be a little more patient. We continue to talk about getting a great one instead of a good one and we just took too many good ones.”

Berkshire’s Jarett Smetana led all scorers with 24 points. He hurt the Hornets on both ends of the floor.

“Smetana was just incredible all night on the glass, changing shots and getting a hand on loose balls,” Gallo said. “He made us very uncomfortable on both sides of the floor. We’ve got to do a better job on him the next time when we go over to Berkshire because that becomes a must win for us now after dropping this one in the league. The seniors know what they have to do when we go over there. We’ll be ready.”

Grazia led the Hornets with 14 points while Skiljan and Tommy Loncar both contributed with 12. Madden finished with six.

“We’ll be OK,” Gallo said. “This one hurts. On our floor against our rival, to lose this game, I don’t think anyone is happy. I think we’re going to have three long, hard days of practice before Cuyahoga Heights because we need to get that one over there.”