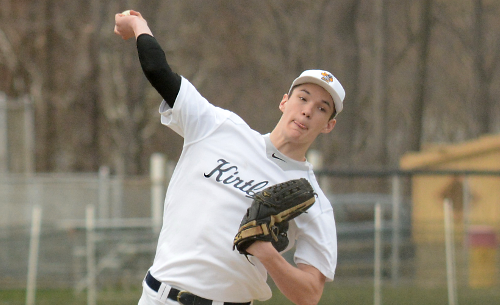 Kirtland returns just two starters from last season’s team, which won a school record 20 games and won its first outright conference title after sharing it the past two seasons, but the Hornets are far more experienced on the mound with four starters returning.

“I think we’re going to be very strong at the pitcher position this year,” said Kirtland coach Luke Smrdel. “We go five, six deep into the bullpen besides the top starters too. We’ll be very strong pitching-wise and I think we’ll be able to compete with any team because of our pitching.”

Senior Matthew Finkler returns as the ace of the staff. Juniors Anthony Fortuna and Michael Kmentt and senior Seth Carn round out the starting rotation.

Junior Vinny Matticoli and sophomores Alec Ward and Johnathan Miller are expected to come out of the bullpen along with freshman Tyler McCrory.

Finkler and senor Jacob Boyd are the only two returning starters in the field for the Hornets.

Finkler, who hit .355 with 25 runs batted in last season, plays first base when he’s not on the mound. Boyd, who batted .422 with 15 RBI, five doubles and a team-high three triples, will start in left field.

Matticoli and sophomore Ben Stark are competing for the starting role behind the plate while sophomore Owen Loncar will play first and sophomore Palmer Capretta and junior David Allchin will fill the middle infield positions. Capretta is expected to start off the year at shortstop.

Fortuna will fill in at third base for senior Adam Hess, who is out for the year with a shoulder injury.

Junior Joey Bates will start in center field and sophomores Andrew Hutton and Ryan Friedenburg and junior Daniel Heimsoth are fighting for the starting role in right.

“We’re going to be young but we’re very talented,” Smrdel said. “We have a lot of young guys stepping into starting roles this year but I really think they’re ready to make the transition into those roles and I think it’s going to be a great season of Kirtland baseball.”

Smrdel is particularly excited about his infield.

“Our infield is going to be very athletic but very young,” he said. “Overall, these guys have great fundamentals. They’re very smooth with the glove and have great arms. They know the game. It’s going to be a pretty easy transition into this year for these young guys. These guys are varsity ready.”

The outfield is shaping up to be one of the team’s strengths.

While pitching is the team’s obvious strength, Smrdel is confident his squad will continue to improve throughout the season and by the time the post-season rolls around the Hornets will be a force to be reckoned with.

“We’re pretty balanced from top to bottom,” he said. “Pitching is going to be our biggest strength but overall we’re very balanced. Our biggest weakness this year is just the youth and the lack of experience for some of the guys. We’re hoping that from day one these guys get the experience they need for the post-season and we can make a good post-season run.”

The Hornets will be tested early and often.

Smrdel put together a schedule that will challenge his players to be at their best on any given day.

“We’ve got some big matchups against Division I teams,” he said. “We’re still trying to make our name with all the teams around here as a perennial threat. We’ve got Mayfield, Chagrin Falls, St. Ignatius, St. Ed’s on the schedule. Independence is always a tough matchup in Division III. We start off with Gilmour in the first week and we’re seeing Garrettsville Garfield for the first time in my career here this year. They were in the district final last year. We have a very challenging schedule. We play North and Lake Catholic on a Saturday too.”

Smrdel believes if the Hornets are to take that next step and win more than a league title they’ll have to play the best teams in the regular season.

“We have high aspirations,” he said. “We really think this team can be very good and compete with anybody in the state in our division. We’re just ready to go.”

The Hornets kick off the season at home on March 31when they host Richmond Heights.