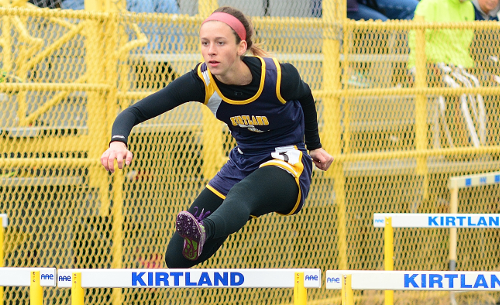 Harris set new records in both the 100 (14.93 seconds) and 300 hurdles (44.39) while Straus finished second in both events with times of 15.50 and 45.83 seconds, respectively. Straus ran a 15.32 second time in the 100-meter hurdle preliminaries, which would have beaten the old record, and her 300 finals time was almost a full second faster than the previous record.

“That’s the girl Katie has been chasing,” said Kirtland girls’ coach JP Moran. “She’s real close. She’s right there with Harris and I know Harris is going to be one of the top girls in the field (at regionals).”

Straus, who also placed second in the high jump (5 feet), will get another shot at Harris in next week’s regional meet at Austintown Fitch.

“It feels fantastic to be able to advance, especially because it’s my senior year,” Bella Powers said. “Also, since we are in Division II, we were up against some really tough competition. I think it’s awesome how well we all worked together and I can't wait for regionals.”

Juniors Lauren Covetta and Christine Walsh, senior Angela Ritossa and freshman Sydney Snyder teamed up to finish second in the 4×8 with a time of 10:20.43.

“It feels amazing to be going to regionals for the first time,” Ritossa said. “But it feels even more amazing to be going with my three other teammates because, even though they are younger, we all push each other and I think we have a great chance to go to states.”

Kirtland nearly had three other regional qualifiers as Snyder finished fifth in the 800 (2:30.21), junior Maddie Zuberer was fifth in the pole vault (8-00) and the 4×100-meter relay team of Bryll, Bella Powers, Grace Powers and Kadas finished fifth, just 0.41 seconds behind fourth place Wickliffe.

Only the top four advanced to regionals.

“The pole vault came down to misses,” Moran said. “(Zuberer) and the girl from Chagrin falls both went out at the same height so it went back to misses and (Zuberer) had one more miss than her. It was that close. It was a dead tie to go to regionals.”

The Hornets finished in sixth place with 59 points.

“We’re excited,” Moran said. “We were joking around saying we wanted to take a bus to regionals, not a school van. We said, ‘#FillTheBus,’ so we needed enough (qualifiers) to get over the van limit. Overall, sending nine different girls to regionals in Division II, we’re thrilled about that. They really got out there and competed. Everybody really did a nice job.”