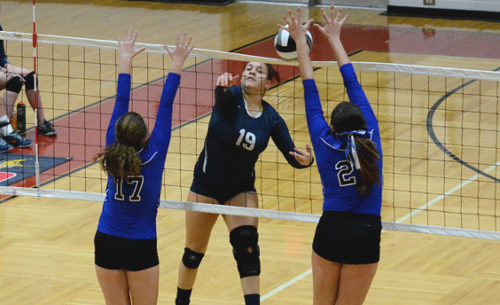 That’s when Kirtland’s seniors stepped up and refused to let their careers come to an end. The Hornets won the next two games, 25-19 and 15-13, to win the section crown and advance to Monday’s district semifinal against top-seeded Newton Falls.

“That was a tough one,” said Kirtland coach Bob Schenosky. “I have to hand it to the Grand Valley team. Boy do they scrap. They’ve got a nice team. Their middles are tough. The one girl was injured and came right back. I can’t say enough about our opponents. They were really terrific.”

The Hornets could do no wrong in the early parts of the first set. They built a lead on hustle, execution and by taking advantage of Grand Valley’s mistakes.

Their 16-point lead didn’t last as the Mustangs pulled to within 23-17. Kirtland scored the final two points of the match but the momentum clearly had shifted to the Mustangs.

With their backs against the wall heading into game 4, the Hornets had two options.

“We started so quick then we struggled in game 2 and game 3,” Schenosky said. “In game 4 and game 5, to me it was all about the heart and that’s what we talked about. This is your season. You either want to keep going or it’s going to end now. I think the effort they put in the fourth and fifth game reflects that.”

Senior Olivia Mancisio shook off a slow start to dominate the net down the stretch. She finished with a team-high 10 kills and eight blocks.

“Olivia certainly took over in those last two games and it was just difficult for the other team in the middle, to say the least,” Schenosky said. “I think she came back and realized that this is the end of her season if we’re done. She came back and did a terrific job.”

Seniors Julia Ricketti and Sam Bailey pitched in with seven kills each and Ricketti led the team with 11 digs and had three service aces. Bailey had six blocks.

“I think all over the court they did a good job,” Schenosky said. “Our hitters did well, our passing got better. This is a special team. I’ve had them all since seventh grade. It’s a really special team. These kids, they don’t quit. We have practices until a certain time and they all want to stay an extra half hour and continue to work. It’s just a tremendous work. I’m proud that I can coach them.”

Kirtland improved to 15-9 on the season.