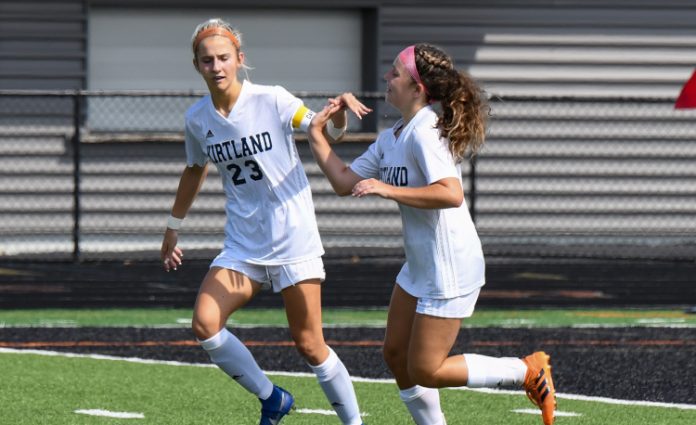 A two-week layoff left Kirtland vulnerable heading into its non-conference game at Crestwood on Tuesday.

It didn’t take long for the Hornets to wake up.

It took Crestwood’s Reagan Mory just 39 seconds to give the host Red Devils a 1-0 lead but the Hornets responded with seven straight goals and went on to win, 8-2.

“Giving up an early goal was a bit of a wake-up call for sure,” said Kirtland acting head coach Ivica Miljak. “We had to reschedule a couple of games and had a 15-day gap since we last played. We knew going in that it was probably going to be a slow start tonight. To their credit, the girls did a nice job responding after conceding early. They hold each other accountable every day, and that’s a testament to the culture of this program.”

Senior Erika Zschuppe went on a first-half scoring spree that gave the Hornets control of the match.

She scored her first goal in the sixth minute off of a Giuliana Vladic service and three minutes later, she gave the Hornets the lead for good off of a Reilly Greenlee assist.

Zschuppe scored goals No. 3 and 4 in the next 10 minutes and freshman Clare Davidson scored the fourth goal of her young career in the final minute of the first half to push the Kirtland lead to 5-1.

The Hornets converted a corner kick early in the second half as Greenlee perfectly placed the ball at the far post for Zschuppe, who knee-tapped in her fifth goal of the game, a career-best.

Paige Dolovacky added a goal off of a Zschuppe assist midway through the second half and Corinne Greenlee closed out the scoring with 5:24 left in the game.

“We have great depth on our roster this year, with several girls eager to step up and take on more responsibility,” Miljak said. “It’s a good problem to have, and it was nice to see some of our players record their first goals of the season, and of their varsity careers. We’ve been working on our attacking movement at training, and the ideas are starting to stick. As the season goes on, our younger players will only grow in confidence and it will all come together nicely.”

Kennedy Boyd recorded eight saves for the Hornets while Kylie Krupp finished with 13 for the Red Devils.

The Hornets improved to 3-0-1 with a showdown at Hawken on Thursday.

“As a group, we try to learn a little more about ourselves each time we step out on the field, regardless of the result,” Miljak said. “We are probably going to get every team’s best shot this season and as we get deeper into the fall, early setbacks like tonight could be difficult to bounce back from. It will be important for us to continue setting high expectations and to do a better job of controlling the first five minutes of each half, and after each goal.”