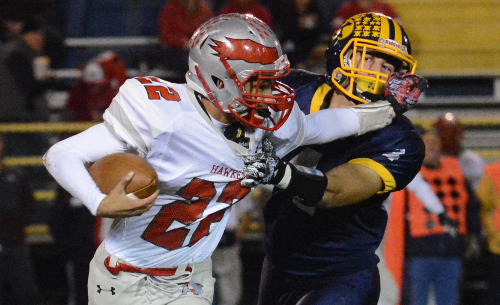 KIRTLAND—It wasn’t a good week for the Hawken Hawks.

Kirtland scored 16 points in the final minute of the first half to take a 30-0 lead into halftime and went on to win, 36-6.

“Those were big points to kind of put them away there,” said Kirtland coach Tiger LaVerde.

Leading 14-0 on two David Allchin second quarter touchdowns, the Hornets slammed the door on the Hawks.

Joey Bates’ 4-yard touchdown run made it 21-0 with 1:30 left in the first half and Hawken’s offense started its next possession at its own 3 after the Hawks’ kickoff return man slipped and went down untouched.

Evan Madden stuffed Hawken for a two-yard loss on first down and the Hornets recorded a safety on the next play.

“Coach said, ‘Let’s get three stops in a row. We’ve got three time outs so we can get a quick score,’” Madden said. “He really pumped me up. I just read the keys that they told me to read and they put me in the right position to make a big play and I did.”

Kirtland recovered a fumble on the ensuing kickoff but Bradley Hauptman’s field goal try was blocked as time expired in the first half with the Hornets up 30-0 and Hawken’s dreams of a CVC title fading faster than the second half running clock.

“We got some momentum and the kids kind of fed off the energy and we had them pinned back and got a safety,” LaVerde said. “We got a good kick return that gave us good field position and we made some plays in the passing game.”

The biggest play came from Allchin, whose 28-yard touchdown reception was a thing of beauty.

Owen Lewis threw a pass just out in front of Allchin, who was racing down the right sideline when he reached out with his right hand and pulled the ball into his body for his second score of the night.

Allchin finished the game with three catches for 52 yards and he carried the ball 10 times for 119 yards.

Bates led the Hornets with 126 yards on 26 carries with two touchdowns and Madden had four catches for 42 yards.

“Our coaches set us up to be successful on defense,” Madden said. “They prepared us real well for their offense. We read the keys that showed us where the ball was going so that really helped us out.”

Kirtland will play in Week 11 for the sixth straight season.

“I think we’re confident but we’ve got to really prepare for the next team that we’re going to play and hope for the best,” Madden said.