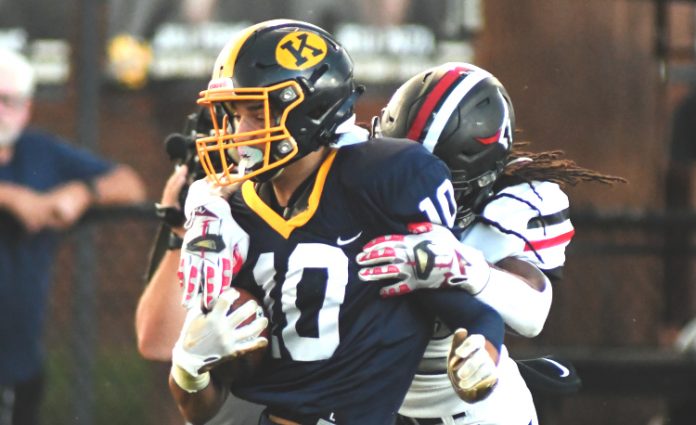 KIRTLAND—Big plays on offense and a stingy defense led Kirtland to a 21-0 shutout over visiting Lutheran West on Friday.

“That defensive line with three down tackles and two D-ends, we didn’t do a great job of blocking them, but we had a couple of big plays and the defense just played really, really well,” said Kirtland coach Tiger LaVerde who ran his win total at the school to 201. “(Lutheran West) had a tough time getting anything going. They want to run the ball and we kind of stopped that and then they kind of started to throw it and we did a nice job of getting pressure on the quarterback.”

Both teams traded punts to start the game and then Gino Blasini broke a 56-yard run to set the Hornets up at the Lutheran West five-yard line. Three plays later, Macguire Boyd punched it in from the one for a 6-0 lead.

Neither team sustained a drive until late in the second quarter when Kirtland put together a nine-play, 63-yarder capped by Rocco Alfieri’s one-yard touchdown plunge with 54 seconds left in the half. Alfieri added a two-point conversion to push Kirtland’s lead to 14-0.

The Hornets caught a break when the Longhorns fumbled the ensuing kickoff and Will Bates recovered it at the Lutheran West 33.

A defensive pass interference call moved the Hornets to the 18 and Jake LaVerde turned the turnover into a touchdown when he dropped a dime into Blasini’s hands in the corner of the end zone with 10 seconds left in the half.

“It was 6-0 with under two minutes left (in the half),” Coach LaVerde said. “We scored and they dropped it on the ground and we took advantage and got in a little two-minute drill and got the first down. Gino made a heck of a catch in the end zone and Jacob made a nice throw.”

The touchdown pass was the first of Jake LaVerde’s career and it came after he missed Blasini a few plays earlier.

“The first one he had, it was a little underthrown and the kid tipped it away,” Coach LaVerde said. “That one, he just learned his lesson and put a little bit more on it and Gino did the rest.”

Kirtland’s defense took it from there.

Lutheran West managed just 65 yards of offense in the first half and -7 in the second.

“They kept hustling and hustling,” LaVerde said of his defense. “We had 11 guys flying around. Mitch Carestio was all over the place and Phil (LaVerde) and Daven (Patel) and Macguire; we just had a lot of kids running to the ball.”

LaVerde finished the game 2-for-3 passing for 39 yards and the touchdown pass.

Blasini led the rushing attack with 60 yards on five carries and he also caught both of LaVerde’s passes for 39 yards and the touchdown.

Alfieri carried 15 times for 49 yards and one touchdown and Tommy Gogolin added 48 yards on the ground on just six carries.

“We’re going to grow,” LaVerde said of his offense. “We lost 20 seniors to graduation last year in a great class and there are spots where we’re young, so we’re going to get better every day. This game helps. We weren’t perfect tonight on offense but once we got that lead, the way the defense was playing, don’t throw a pick-six and get them back into the game. Just chew as much clock as you can and punt it and play defense. If we had to score in the second half, maybe we’d have done something differently but I just wanted to get out of here (with a win). That’s a dangerous team right there; they’re going to win a lot of football games.”

Hornets inspired by those who paved the way

Hornets right the ship with win over Harvey