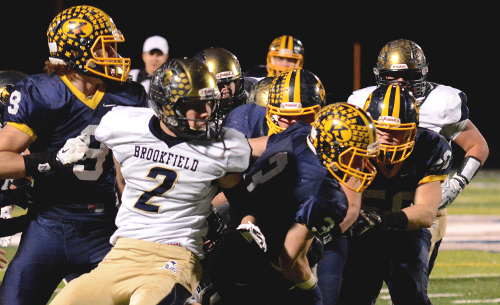 Kirtland slips by Brookfield to advance to regional championship

TWINSBURG—Top-seeded Kirtland got all it could handle from fifth-seeded Brookfield in Saturday’s Division VI, Region 19 semifinal game at Tiger Stadium.

The Hornets gave up two long touchdown passes in the second half but held on to defeat the Warriors, 27-17, and will play in a sixth straight regional championship game next weekend at a site to be determined.

“It’s week 12 so this late in the season there’s all good teams and you’re going to have to play four quarters,” said Kirtland coach Tiger LaVerde. “Our kids just battled. I’m very proud of them for how they fought for four quarters. That’s a good football team.”

Blake Andonian recovered a Brookfield fumble on the game’s opening possession and the Hornets covered 35 yards in seven plays to take an early 7-0 lead. Quarterback Owen Lewis capped the drive with a 1-yard dive into the end zone and Bradley Hauptman booted the extra point.

Brookfield’s Kasey Tingler kicked a 31-yard field goal on the Warriors’ next possession to cut Kirtland’s lead to 7-3.

Hauptman added two second quarter field goals—one from 32 and the other from 25 yards—to give the Hornets a 13-3 lead at the break.

Brookfield forced a Kirtland punt on the first possession of the second half then scored on a 51-yard pass from Augustus Necastro to Xavier Bailey with eight minutes left in the third quarter.

The Hornets responded with a 30-yard pass from Lewis to David Allchin. Lewis threw a 38-yard pass to Evan Madden earlier in the drive to set up the score.

“They stopped us and scored to make it 13-10,” LaVerde said. “Our quarterback made a great throw and Madden made a great catch and run to get that drive going.”

Bates added a 7-yard touchdown run in the fourth quarter to extend Kirtland’s lead to 20-10. He carried five Warriors into the end zone with him.

“That’s him,” LaVerde said. “He does it for us every week. He’s our leader on offense and captain. He got banged up a little bit. He had a bad ankle and hung in there. It was big for us to get those yards.”

Brookfield made it interesting with a 64-yard touchdown pass from Necastro to Tingler on the first play of the next drive but Kirtland’s defense kept the Warriors out of the end zone for the final six minutes of the game.

The Warriors came up a yard short on a 4th-and-4 at the Kirtland 36. That led to the Brookfield sideline being assessed four 15-yard personal foul penalties after the play which gave Kirtland the ball at the Brookfield 5.

The Hornets took a knee on all four plays and Brookfield threw two incomplete passes to close out the game.

“The fact that we have played a lot of these (playoff) games in the last few years I think really helps us,” LaVerde said. “Our kids, it’s just another game to them. It’s not the biggest thing in the world to get this far. They appreciate it and enjoy it and love each other. We get to spend another week with them. That’s what I’m most proud of.”

Kirtland will play Cuyahoga Heights in the Region 19 championship game on Saturday at a location to be determined. The Hornets beat the Redskins, 28-26, in the regular season back on Oct. 23.