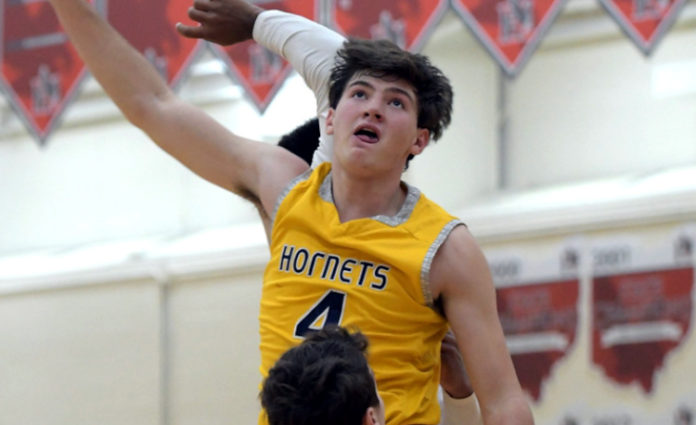 Kirtland drained 13 3-pointers on the way to an 82-47 nonconference win at Conneaut on Thursday that snapped a three-game losing streak.

The Hornets, who were playing their fourth game in six days, entered the contest having lost three straight—including one in overtime and another that was decided in the final seconds.

“It’s always nice to get the bad taste of losing out of your mouth,” said Kirtland coach Shawn McGregor. “I’m proud of the guys for coming out and setting the tone for a big win on the road.”

Kirtland’s offense heated up early in the game.

Led by Joey Grazia, who finished with a game-high 23 points, the Hornets sank 10 3-pointers in the first half as they built a 48-20 lead.

Grazia hit four of those 3-pointers.

“I think our defense and using that to get out into transition and get easy buckets, then our ball movement and sharing the basketball was key,” Grazia said. “Shooting the ball well was big.”

The big lead took the pressure off of Kirtland’s defense and allowed the Hornet shooters to settle in.

Liam Powers added nine points off of three 3-pointers and Gage Sullivan, Mason Rus and T.J. Green each closed out the game with eight points.

“Defensively, we did a great job of forcing turnovers and converting them into some easy scores,” McGregor said. “Liam was a big lift for us knocking down a couple of 3s early and Mason Sullivan forced some turnovers anchoring the defense. Grazia started hot hitting four 3s and Gage DiFabio knocked down two. When we shoot the ball well and can space the floor we are a very tough team to defend.”

The Hornets, who improved to 7-8, hope to build off this momentum on Saturday when they host Lake Catholic.

“It felt great to get out there and come away with a win,” Grazia said. “We started off fast and never looked back, finally shooting the ball well and using our defense to get into the offense. Everything tonight felt great.”