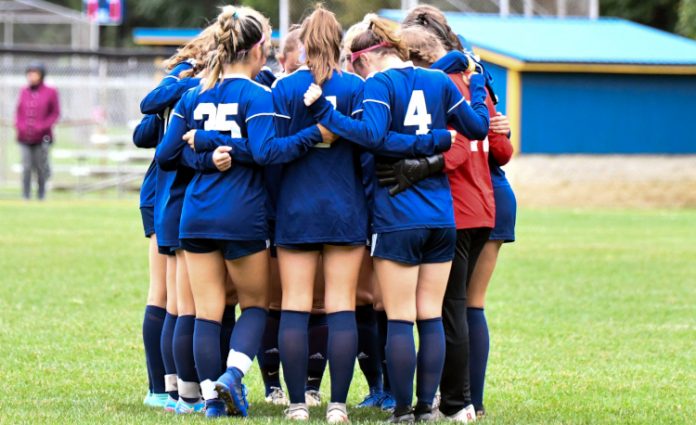 Kirtland closed out the regular season with a 4-3 come-from-behind win at Perry on Tuesday.

The Hornets, the defending Division III state champions, were tested early and often from the Pirates and now head into the postseason riding a three-game winning streak and better prepared for the intensity of playoff soccer.

“That was a playoff atmosphere tonight,” said Kirtland acting head coach Ivica Miljak. “Under the lights, beautiful stadium, extremely physical match…we play the schedule we do for a reason, and tonight showed why. Games like this get you ready for the tournament. Our girls have been tested all year long, and proven time and time again that they’re up to the challenge.”

Reilly Greenlee scored her sixth goal of the season off of Stephanie Drazetic’s fifth assist to give the Hornets an early 1-0 lead just 10 minutes into the game.

The Hornets had possessed the ball and created several scoring opportunities early in the first half, but had little to show for their efforts.

“I thought we moved the ball around pretty well tonight, particularly when we were able to open up the game a little bit and switch play into the wide areas,” Miljak said. “Steph did a great job to find Reilly with her cross. She has really stepped up and made the most of her opportunities this year. And just a composed finish from Reilly, whose leadership has been immense all season long. Moving into the postseason, it’ll be extremely important to maintain that balance in the attack. When we have several girls who can be a threat, it opens up spaces in other parts of the field and makes our job a little easier.”

After Greenlee’s goal, the Pirates took control of the match largely due to freshman Jordan Rowan, who scored two goals and assisted on another to give the Pirates a 3-1 at the break.

Rowan scored her 23rd goal of the season in the 16th minute and then assisted on Marcela Rodriguez’s goal four minutes later. Rowan added goal No. 24 off of a Faye Makad assist with 10 minutes left in the first half.

Erika Zschuppe’s goal with two minutes left in the first half gave the Hornets the momentum heading into the break.

“Down 3-1, our message to the girls was simple: stick together,” Miljak said. “We set the bar pretty high for ourselves, and although we didn’t play up to our standard in the first half, I thought there were several encouraging moments, and I didn’t feel that the 3-1 score late in the first half accurately represented the game. It came down to a matter of belief that we could dig ourselves out, and we were able to grab one back to go into halftime down 3-2. At that point, we made a few tactical tweaks and were able to control the game pretty well from there.”

Zschuppe tied the game midway through the second half and scored the game-winner on a penalty kick with 18 minutes left.

“This team has shown incredible resilience all year long, in the face of adversity both on and off the field, and tonight was no different,” Miljak said. “To come from behind like that is not easy, and I’m extremely proud of the way they’ve responded in these moments.”

With her hat trick, Zschuppe now has scored 42 goals this season.