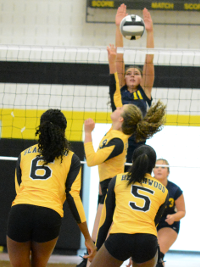 Kirtland’s and Beachwood’s volleyball teams found out on Thursday they have more in common than new head coaches. They found out they both have the ability to battle back from game-ending situations to play another point.

“It was an incredibly exciting match,” said Kirtland coach Bob Schenosky. “I take my hat off to Beachwood. They’re an incredibly scrappy team. They have some great hitters and they’re incredibly well coached. I think our girls came back in the last two games and they didn’t let anything hit the floor. Every girl participated in the effort. As a coach, you can’t ask for anything more than that.”

The Bison were one point from winning it all before the Hornets scored the final four points in the decisive set.

“There are a lot of things we can be proud of,” said Beachwood coach Sarah Schoenhagen. “I don’t think they’re used to Beachwood really fighting back like that, coming back after a 14-25 loss, so we saw a lot of good things. I think if they had that energy that they finished with that second game it might have been different.”

Crawford opened the decisive set with a block to give the Hornets the 1-0 lead but Watkins responded with one of her seven kills to tie it. Another Crawford block made it 2-1 but again Watkins came through with a kill, her second of three in the set, to tie it.

A Crawford kill and a Beachwood error put the Hornets on top, 4-2, and Watkins’ third kill of the set put the Bison on top, 8-7.

The teams traded points until Jada Stevens and Tamarea Townes recorded back-to-back kills to give the Bison a match and game point at 14-12.

That’s when Schenosky called timeout to refocus his players.

“I just told them it’s up to you right now; continue to give the effort and don’t give up,” he said. “We can come back from this if nothing hits the ground except a body with the ball and we work as hard as we know we can do.”

A Crawford kill pulled the Hornets to within one and another Beachwood error tied it. Kirtland took a 15-14 lead on Crawford’s ace and the Hornets won the next volley to end the game.

“This is great for us,” Schenosky said. “The front half of our schedule is loaded with bigger schools and we’ve come out of the first two weeks 2-2 and we’re very excited about that as we approach the CVC schedule. I think this really helps build our confidence getting into the conference.”

On the other sideline, the Bison weren’t as happy but they have every reason to be enthusiastic heading into the rest of their season.

“They’ve got to pick their heads up,” Schoenhagen said. “They’re emotional and that’s good because that means that they put everything out there and that’s what every single game should feel like. We came back and then a couple of errors got us back down. It’s making sure we stay mentally strong down the stretch like that to minimize our errors.”