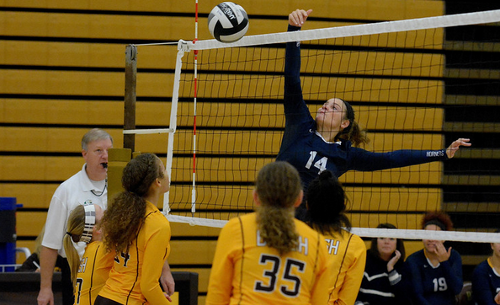 “Overall the girls I thought played a great game,” said Kirtland coach Bob Schenosky. “Saturday morning games are always difficult, especially for us. We found that out historically, but they came out and hustled. I thought we hit well. We’re working on some things for playoffs that I think went well today. “

“I thought Sam Bailey and Olivia Mancisio had a great week,” Schenosky said. “I think Taylor Frazee in the last two games kind of turned it around with her hitting. I thought she hit very well today. Not all of them went down for points but she was aggressive and did a nice job.”

Lydia Shiffler pitched in with five kills and seven aces.

“Starting in that third game, she came out with three kills in a row,” Schenosky said. “I think she’s doing a nice job on both ends of the court, setting as well as hitting.”

The Hornets, who went 3-1 on the week, improved to 12-8 overall and are preparing for the post-season.

“We tried to get everybody in for the last time this season as we think about next week it’s all about the playoffs and getting our work in for that,” Schenosky said. “I thought overall they did a nice job.”

Kirtland hosts Fairport Harding on Tuesday then closes out the regular season on Thursday at Berkshire.

“We’ve got Fairport on Tuesday, which is Senior Night, and then we have Berkshire on Thursday, right before playoffs,” Schenosky said. “There’s a lot to think about as we go into Thursday’s game.”