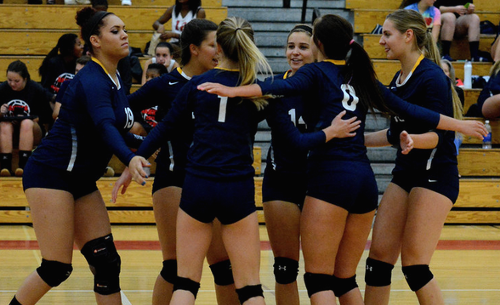 Kirtland played well in all facets of the game to defeat Cuyahoga Heights, 3-0, on Tuesday. The Hornets got off to a fast start and never let up in winning 25-9, 25-20 and 25-17 to improve to 3-4 overall and 2-2 in Chagrin Valley Conference play.

“The girls came out great,” said Kirtland coach Bob Schenosky. “They exploded right out of the gate. They were hitting well, our servers were great and had several aces tonight; everybody was moving. It was a lot of fun to watch. They were excited and played together. It was a great effort against a good team. Cuyahoga Heights is well-coached. They hustled and never gave up. It was a good match.”

“Sam Bailey came out and hit incredibly well,” Schenosky said. “She played the back row well tonight. The last couple of games she hasn’t been playing back row but she did tonight and did a great job. Lydia Shiffler had a great game for us and Olivia Mancisio was in double-digits in kills and had a handful of blocks. We had a terrific game hitting.”

“The girls played with tremendous hustle tonight against a team that just didn't quit,” Schenosky said. “Our girls worked hard and hit the ball well.”