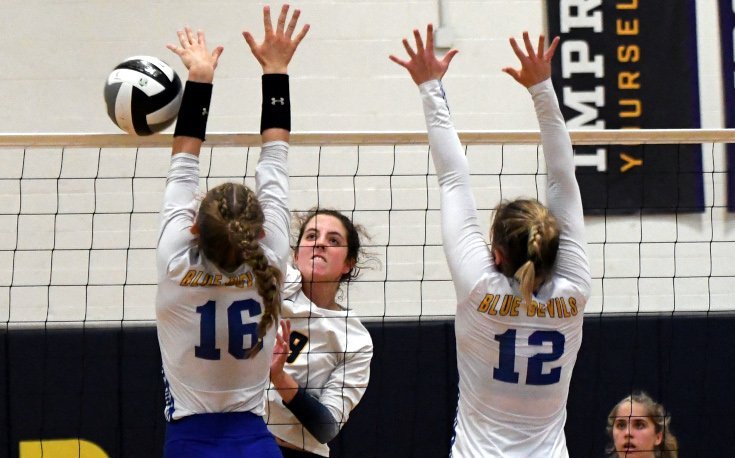 KIRTLAND—For the second time in eight days, Kirtland earned a sweep in a battle of unbeaten teams.

Last week, the Hornets defeated previously undefeated Berkshire, 3-0, and then on Thursday, Kirtland swept Independence, who entered the match 7-0.

“I’m speechless,” said Kirtland coach Arlayna Newcomer. “More than anything, I’m 100-percent elated. We game planned so hard and we worked so hard for this. These girls remembered regionals (in 2020) and we talked about this being our first big match of the season and we said this was a turning point for us; this is our first step to getting a state championship. This didn’t happen by accident. They worked 100 percent for this and I’m so proud of them. They overcame adversity and had some hard points. We went back and forth with them and we never let up.”

There were eight lead changes in the first set before the Hornets rallied to win and nine in the second set as both teams had multiple chances to win the set.

Kirtland trailed by four points in the third set, which prompted Newcomer to consider calling a timeout.

Instead, she listened to her players and they went on to earn the sweep.

“We started to get down a couple of points when they went on a run and I looked at them and they looked a little shaky,” Newcomer said. “I asked them if they wanted me to call a timeout and almost in unison, they said no. It was at that moment that I knew they were ready and they wanted it. I’ve never seen something so powerful from a whole team like that. That moment gave me chills.”

That mentality has been the difference for the Hornets in changing the culture of the program, which has resulted in back-to-back district titles and Thursday’s win that could be considered one of the biggest regular season wins in program history.

The confidence the Hornets have developed over the course of the past several seasons showed up on Thursday.

Kirtland and Independence went toe-to-toe for three sets. In each one, both teams went on runs and controlled the tempo.

In the past, Kirtland might have folded in those situations.

Kirtland entered the match 0-2 against the Blue Devils since Independence joined the Chagrin Valley Conference.

The Blue Devils swept the Hornets to open the 2021 season and they beat Kirtland in a 2020 regional semifinal.

On top of that, Independence has won 121 straight league games.

Thursday’s match was a non-conference game so that winning streak is still intact, but Independence’s streak of 79 straight wins over current CVC members was snapped. Independence last lost to a current CVC team in 2016 when Lutheran West ended Independence’s postseason run. The Longhorns had not yet joined the CVC at the time of that match.

“Obviously, they were better than us tonight,” said Independence coach Tony Messina. “We made way too many mistakes and I’ll attribute that to our youth. We need to get better.”

Despite the big win, Kirtland has bigger goals in mind for this season.

That means the Hornets have to quickly refocus on the remaining opponents on their schedule.

“It’s all about keeping our eyes on the prize,” Newcomer said. “We’re worried about our next game. We know the goal and to get there we have to take baby steps. The girls know each game is important and each practice and every day we’re in the gym every touch is so important. They have done a fantastic job of prioritizing the little things and today made it very clear that we’ve absolutely put in the time and they deserved that win. It’s something we’ve been waiting for for a long time and it’s just one step in the right direction. We’re ready for the next one.”

Kirtland hosts Geneva on Monday while Independence will look to get back on track against Wadsworth on Saturday.