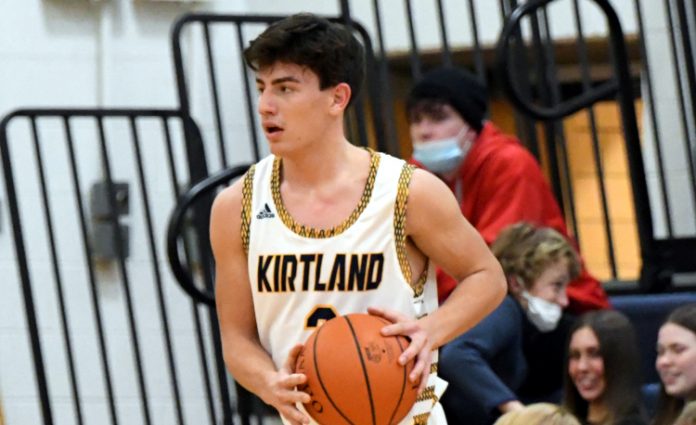 Kirtland’s defensive pressure and balanced offense proved too much for visiting Wickliffe as the Hornets downed the Blue Devils on Wednesday, 67-56.

“I thought the kids play great,” said Kirtland coach Shawn McGregor. “They played extremely hard. We had some turnovers and some missed shots but they were resilient and played hard.”

Ramon Lescano scored five of his game-high 18 points in the first quarter as the Hornets jumped out to an 11-8 lead.

“It was great to be back and lead the team to a win,” Lescano said. “Having everyone back puts our role guys in positions to contribute heavily to our win. It was important that I picked up where I left off and I did just that.”

Vince Carriero scored five of his 10 points in the second quarter as the Hornets pushed their lead to 29-24 at the break.

Kirtland increased its lead in the third quarter by outscoring the Blue Devils, 16-11.

The Hornets finished strong in the fourth quarter.

Lescano drained a pair of 3-pointers and two free throws in the final eight minutes to seal the win.

“I attribute my offensive success to my aggressiveness,” Lescano said. “I just had to get some shots up and I felt confident, but my free throws were a big issue so I’ve got to get in the gym and work on that. As a whole, just breaking the press and making easy basketball plays ultimately led to a great offensive night for the team.”

Withrow also scored in double figures with 10 points, Gage DiFabio and Owen Mueller both pitched in with eight points, Rus finished with six, and Pierce Boyd scored three points. Phil LaVerde and Scotty Haymer both finished with two points for the Hornets, who improved to 2-2 overall.

“The way we’re set up is we’re going to play a lot of guys and we need different guys to step up every day,” McGregor said. “Everyone is going to get an opportunity to play and then what you do with your minutes is up to you. If you take advantage of your opportunities, you’re going to put yourself in a good position to play. We’re a team that relies on depth. It’s hard to play full-court defense with just five guys so you need that depth in order to be competitive and guys made plays.”

Michael Culp and Owen Malaney both scored in double figures for Wickliffe with 16 and 11 points, respectively.

LaVerde and Haymer were tasked with slowing down both players and their effort paved the way for the Hornets to win the game.

“Scotty Haymer and Phil LaVerde did a great job on their two big scorers,” McGregor said. “They did a really nice job.”

Kirtland returns to action on Saturday against Ravenna Southeast in the Berkshire Showcase. Tip-off is scheduled for 3:00 p.m.

Hornets bounce back with big win