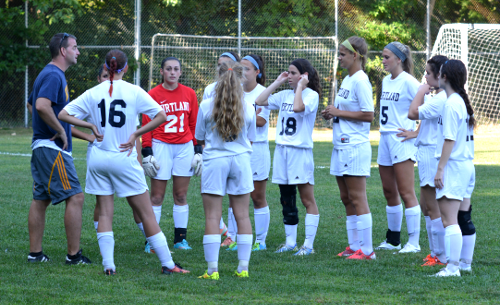 The stage is set for Kirtland’s rematch with Gilmour Academy.

The Hornets defeated Badger, 4-0, in Thursday’s Division III sectional final to advance to the University Heights Division III district semifinals to be played at Gilmour on Monday at 4:30 p.m.

A win over the second-seeded Lancers likely would set up a meeting with top-seeded Hawken, ranked second in the state.

“That’s all we keep talking about,” said Kirtland coach Ed Bradac. “We know what lies in front of us, two very good opponents. First, we have to beat Gilmour and then odds are we would play Hawken.”

That’s a tall order for the Hornets, who have established themselves as a public school powerhouse in the Northeast District.

Since 2003, Kirtland is 86-44-14 overall and 9-7 in the post-season. All seven losses are to private school programs. Gilmour has ended Kirtland’s season in three of the past seven years.

But, the Hornets have battled the Lancers to 0-0 draws in regulation in the past three meetings, including back on Sept. 23. The Lancers scored in overtime to beat the Hornets in last year’s playoff game.

It’s a different story for Kirtland against the public schools.

With their win over Badger, the Hornets improved to 12-4-2 this season. Three of their losses are to private schools (Laurel, Lake Catholic and Cardinal Mooney) and the other was to Division II West Geauga.

Bronte Beaman scored two goals and Katie Straus and Angela Ritossa each contributed with one for the Hornets.

“We looked at Badger’s schedule and one of nice things is we went to Canfield this year and played in tournament,” Bradac said. “Some of the opponents they played we actually played in that tournament so on paper we knew we were the better team. We went out and set the tone early by scoring in the first three minutes.”

Straus knocked in the first goal off the first of two assists for Ariana Cubela.

“It took the pressure off us,” Bradac said. “It was a beautiful left-footed goal. She has done so much from where she was last year and every chance we get we point it out to her. She is very difficult to defend on the outside.”

Beaman made it 2-0 at halftime and she scored the first goal of the second half to push Kirtland’s lead to 3-0.

Her first came off an assist from Cubela and Ritossa set her up for the second goal.

“She’s the type of kid that steps up during a big game,” Bradac said. “That gives her 11 goals on the season. She’s tied with Hannah Vouk for the team lead.”

Ritossa closed out the scoring for the Hornets in a game where she was tasked with shutting down Badger’s top scorer, Holly Masters, who ended the season with 21 goals and 12 assists. Masters closed out her high school career with 74 goals and 42 assists.

“She’s just a workhorse,” Bradac said of Ritossa. “She never wants to come out of the game. She never gets tired. She man-marked their best player for the first half and I don’t even know if the girl touched the ball.”

Maddie Zuberer recorded five saves for the Hornets and notched her ninth shutout of the season.