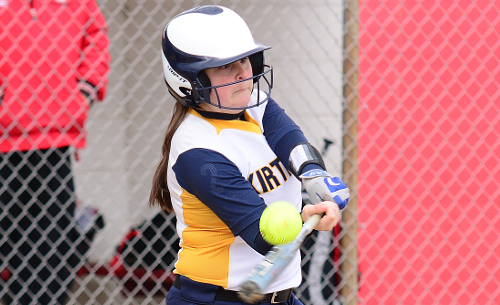 Kirtland pounded out 14 hits to beat Cardinal, 15-5, in a Chagrin Valley Conference Valley Division showdown. The victory pushed Kirtland’s winning streak to eight games and the Hornets now stand at 8-2 overall and 4-1in league play heading into a rematch with division-leading Berkshire on Wednesday.

“We just executed on everything we tried to do,” said Kirtland coach Tony Scibelli. “That’s the girls who have been working so hard on their offense. They were really locked in and we got some players who don’t really get that much playing time some reps out there.”

Hallie Ward kicked off the bottom of the first with one of her two doubles and Sam Achauer singled. Cameron Garcia would single and Rebecca Kissinger walked before Morgan Faber helped her own cause with a double. She would score on Danielle Davis’ single to give the Hornets a 6-0 lead.

Kirtland added five more in the second as the Hornets batted around for the second straight inning.

“We were rolling on all cylinders,” Scibelli said.

“The great thing that’s really helped us on this run we’ve had is we’ve been getting nice contributions from the bottom portion of our lineup,” Scibelli said. “They’ve been doing a great job of putting the ball in play. Morgan and Danielle Davis are two who have really stepped up in the last few games for us.”

“She’s doing great,” Scibelli said. “Both our pitchers, Colleen (Baldrey) and Morgan are freshmen but I have the utmost confidence in them. At this point in season both are battle hardened and contributing to this great run we’re on.”

Dawn Scribben was 3-for-3 for Cardinal with two doubles, two runs scored and an RBI. Jess Koches, Faith Brown, Allissa Nevison and Lexy Fenselon also had hits for the Huskies, who again were without starting pitcher Jasmine Vunak.