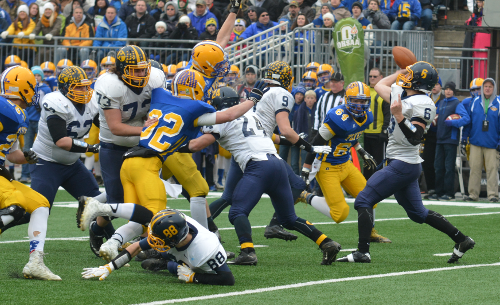 Kirtland held a 22-13 lead over Marion Local with two minutes left in the game, which reminded Grazia of the heartache he felt after Minster overcame a 9-point deficit in the final two minutes of the 2014 title game that denied the Hornets back-to-back state championships.

“How crazy is this?” Grazia asked. “This is exactly like last year.”

Thanks to a fortuitous bounce on an onside kick attempt, Minster scored two touchdowns in 34 seconds to beat the Hornets, 46-42, in that game, played exactly 365 days ago, but the Hornets held on to beat Marion Local, 22-20, to win their third state title in the last five seasons.

This time, the onside attempt rolled out of bounds and the Hornets ran out the clock in victory formation.

“Last year, all of you probably know (the onside kick) came right to me last time and I didn’t make the play and this year I just wanted it to come to me,” said senior David Allchin. “It worked out. I’m glad it didn’t come to me because if it did the same thing could happen again. What happened, I’m glad that happened. I’m glad we won. I love these boys. I love this entire team. The coaches are amazing; they kept us in it.”

Kirtland coach Tiger LaVerde and his staff earned their keep on Saturday.

The Flyers jumped out to a 13-0 first quarter lead and dominated the game statistically in the first half. The Hornets managed just 102 yards of offense on 31 plays in the 24 minutes. Meanwhile, Marion Local quarterback Cole Griesdorn torched the Hornets for 129 yards through the air.

Kirtland flipped the script in the second half.

The Hornets forced a punt on Marion Local’s opening possession of the second half then drove 75 yards in 12 plays to pull to within 13-7. Joey Bates capped the drive with a 1-yard touchdown run.

Bates was the workhorse in the second half. He ran for 160 of his game-high 206 yards in the final 24 minutes.

“The line was just opening up the holes and all the alumni pumped us up (at halftime),” Bates said. “Everyone was talking in the locker room. We knew this was the last 24 minutes we’d ever have of football and we just wanted to make the most of it. We came out and got the win.”

Marion Local responded with a long drive of its own but the Flyers fumbled the ball away at the Kirtland 3 and the Hornets made them pay.

Four plays later Owen Loncar picked off Griesdorn at the Kirtland 38 with just 2:35 on the clock.

Faced with a 4th-and-1 at his own 43, LaVerde opted to go for it rather than to give the Flyers the ball with a chance to win the game.

His decision paid off as Bates broke a tackle at the line of scrimmage and raced 57 yards for a touchdown.

“The line did a great job all morning long and they opened up the hole,” Bates said. “There was just one guy and I knew I had to beat him.”

LaVerde then made another brilliant decision and attempted a two-point conversion.

Lewis tossed a perfect strike over the Marion Local defense and into the hands of Evan Madden in the back of the end zone for the 22-13 lead.

Marion Local made it interesting but the Hornets held on to win the game and the state title.