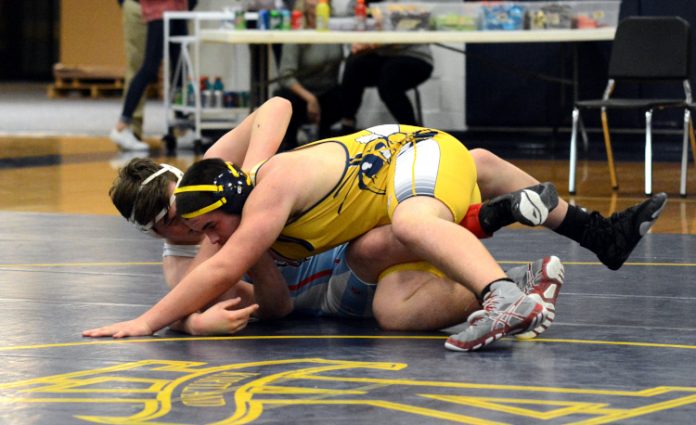 Kirtland’s Will Davidson, Anthony Gencarelli, and Brennon Braud all wrestled their way to the top of the podium at the Perry Pin City Tournament on Saturday.

Davidson finished pool wrestling with a 3-0 record and three pins. He then recorded back-to-back decisions to win the 132-pound title.

“I was happy with my performance,” he said. “I was controlling the pace in my matches and was wrestling my style.”

Gencarelli cruised to the 175-pound title.

“Going out there and doing as well as I did was amazing,” Gencarelli said. “The work that I put in during the off-season really paid off and I’m excited to see what I do going forward.”

He pinned all three of his opponents in pool wrestling and then used back-to-back decisions to win the 175-pound title.

“My key to success was getting into the right mindset, getting good foods in me, and improving my cardio as much as I could going into this weekend,” Gencarelli said. “My plan (moving forward) is keep to my schedule, run every day, practice hard, and go out on the mat and give it my all with my teammates backing me.”

“I was pretty satisfied with how I wrestled especially because this weekend I got to wrestle some good guys and that’s what I’m going to need if I’m going to be successful,” he said. “I’m very confident in my ability, but obviously, it can always be improved and it’s going to take hard work and dedication to maintain this success.”

The Hornets placed seventh out of 17 teams at Perry.