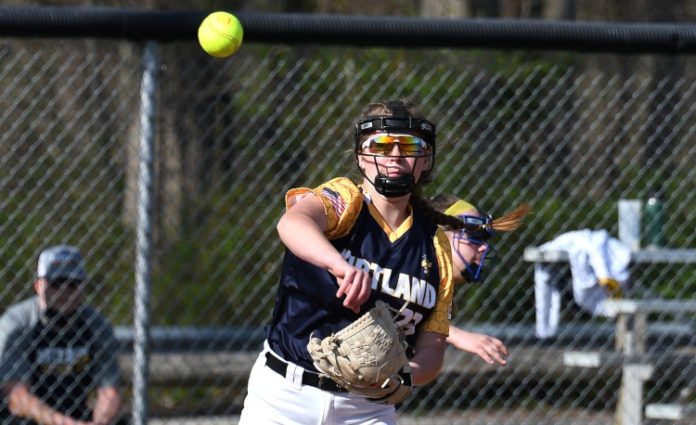 Kirtland’s young softball team has faced its share of adversity this season, including recently when the team struggled mightily in a loss at Lakeside.

A social media post poured gas on the fire, leaving Kirtland coach Jamie Kamensky with no choice but to address the matter with her team.

The Hornets responded on Tuesday with a 5-4 upset win over visiting Wickliffe, the same team that had run-ruled the Hornets two weeks prior.

“We showed up,” Kamensky said. “We finally showed up. During the last three days of practice, we focused back on the fundamentals of catching the ball, fielding the ball, and doing the little things right and today, they did everything right. In my pregame huddle, I told the girls they have two choices; you let that story be true or we write our own ending. Legitimately, the kids bought into that and they wrote their own ending.”

As she has done all season, junior pitcher Gianna Cantini led the Hornets at the plate and in the circle.

She allowed four earned runs on eight hits and struck out 11 and also had a two-run home run among her two hits.

“She’s just a workhorse,” Kamensky said of Cantini. “The kid is the heart and soul of Kirtland softball. She drives us from warmups all the way until the end and today, the team had her back.”

Cantini and the Hornets got off to a great start when she fanned the first two Wickliffe hitters she faced on the way to a 1-2-3 top of the first inning.

Wickliffe strung together a pair of hits and took a 1-0 lead in the top of the second but the Hornets tied the game in the bottom half of the inning.

Cantini started the rally with a single and then scored after Ava Puruczky and Malia Becker both hit singles.

Gianna DiFranco singled in the third and Cantini hit a two-out home run to give the Hornets a 3-1 lead.

“Wickliffe’s pitcher was throwing well,” Cantini said. “I went up to the plate with a really aggressive mindset and cranked the first good pitch I saw. I love ripping homers. Crushing the ball with a bat makes me feel warm and fuzzy inside.”

That home run energized Cantini and the rest of the Hornets as they allowed just three base runners in the next three innings.

Kirtland added a pair of insurance runs in the bottom of the sixth when Puruczky and Nikolena Samac both singled and Stephanie Drazetic hit a one-out single to push Kirtland’s lead to 5-1.

“Those runs ended up being the difference,” Cantini said. “Stephanie is the frosting on our pop tarts.”

“Stephanie is the frosting on our pop tarts.”

Drazetic has struggled at times this season but she approached the plate with the sole intention of knocking in at least one run.

“I went up to bat with the intention to just be aggressive,” Drazetic said. “The team was so encouraging when I went up to the plate and just made me feel even more comfortable and confident. My coach said, ‘Don’t overthink it,’ and that’s what really stuck in my mind throughout my at-bat. Moving forward, this hit will greatly increase my confidence in the idea that it will keep me more relaxed at the plate, yet still being aggressive, and overall knowing I am able to bat under pressure.”

Wickliffe rallied for three runs in the seventh thanks to a two-run Laylah Ruscin home run and Kaylee Lauriel’s RBI single with two outs but the Hornets recorded the last out of the game with runners at second and third.

“This is a super huge win for our team,” Cantini said. “We gave away the first game against Wickliffe this year so this win means a lot to us.”

Cantini, Puruczky, and Samac each had two hits for the Hornets, who did not commit a fielding error.

“Our defense was great today,” Cantini said. “We didn’t commit any errors and we got out of some tough situations. Our defensive all-star this game was definitely Malia Becker. She came up big in key moments. She’s not just our dawg; she’s our alpha.”

With the win, the Hornets improved to 6-11 on the year. Kirtland hosts Bristol on Wednesday in a ‘Gray Game’ to raise awareness for Brain Cancer.

Kirtland muscles up in first win