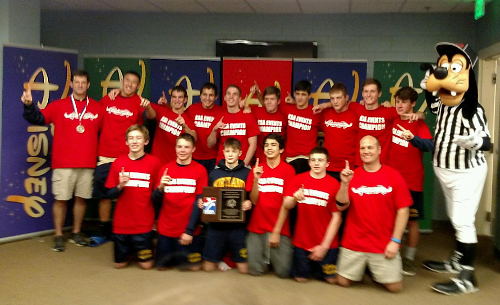 Kirtland’s wrestling team learned a lot from the first day of the 2014 Disney Dual Tournament in Kissimmee, Fla., on Monday. The Hornets finished the first day of competition with a 2-2 record then on Tuesday avenged their two losses to win the tournament championship.

“The big thing (on Monday) was the teams wrestle a different style than we’re used to seeing. There was a lot of mat wrestling going on,” said Kirtland coach Scott Francis. “The kids made a quick adjustment, which is nice to see. The kids knew they could beat these guys but we were wrestling too much of their style and we just said we needed to make sure we make them wrestle like we wrestle all the time. Once we started making them wrestle our style that was a big difference.”

Avon, Conn., and Mount Sinai, N.Y., both beat Kirtland on Monday but the Hornets made their adjustments and beat Avon, 41-32, in the semifinals and ended the tournament with a 37-27 win over Mount Sinai.

“There were quite a few kids that came back and won matches they lost (on Monday),” Francis said. “Even kids that lost matches maybe by pin or something they were keeping them a lot closer and in a dual match that makes all the difference. That’s real exciting, especially when you do it the very next day. How many times do you say you’d like to wrestle them again and we got to this time.”

Jahnke’s and Porter’s were two of the biggest wins.

Jahnke lost to his Mount Sinai opponent by a point on Monday then pulled out a 5-4 win in the championship match.

“Dan did a great job,” Francis said. “He really wrestled smart matches. He was taking good shots when he had to and he was staying away from bad shots. He was pressuring into the kid. The kid had to take shots he didn’t want to take. He wrestled a really smart match. For someone who is a second year wrestler, he really picked it up on that part of wrestling. He thinks about it off the mat and when he gets on there he really does well with how to make a match go his way.”

Porter fought off his back in the first period then recorded a fall in the third to seal Kirtland’s win.

“It came down to Porter’s pin and he spent the first period on his back fighting off a headlock on the edge of the mat. He came back in the third period and put a nice spiral on the kid and turned him and stuck him,” Francis said. “It was exciting. We usually don’t get that feeling in dual matches until you get to the state dual meet tournament. In a tournament like this we were able to get that feeling. It was great for these kids to get into those duals that mean something and getting real excited about winning them.”

Williamson, Francis and Davidson all went 6-0 for the Hornets while Sakenes was 5-1 and Porter finished the event with a 4-2 mark. Jahnke won three matches.

“We had a few kids go undefeated and we wrestled really well,” Coach Francis said. “We had no idea what these teams would be like. That last team from New York, they were pretty good. They had a nice team.

“Both teams that we lost to yesterday were pretty good teams. To come back to beat them (on Tuesday) was nice.”