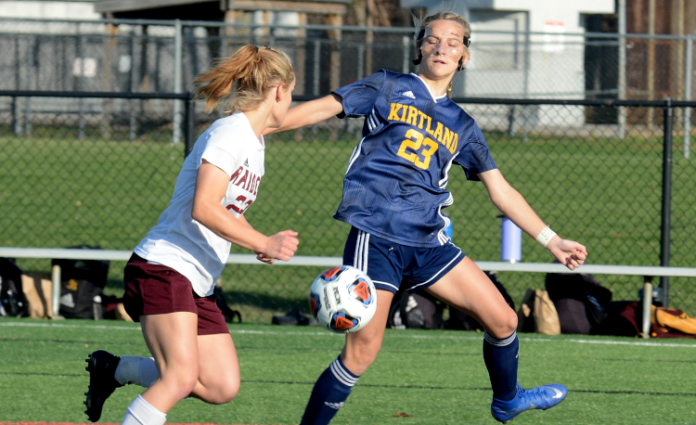 With three goals in Kirtland’s 3-2 win over Cincinnati Country Day in the Division III state championship game on Nov. 13, junior Erika Zschuppe proved she was the best player in the Buckeye state.

On Friday, the Ohio Scholastic Soccer Coaches’ Association confirmed it by naming Zschuppe the Division III Player of the Year.

“Being named Ohio D3 Player of the Year is an honor and an affirmation of all the time and effort I put into this sport,” Zschuppe said. “My parents always told me that hard work is rewarded and there are no freebies in life. God gave me speed, but any player has to work really hard to develop any skills or talent. My dad had a ball at my feet since I could walk and dedicated thousands of hours training me, so this award is extra special to me and a tribute to him.”

Zschuppe closed out the year with 53 goals and 11 assists. She now has 122 goals and 28 assists in her three-year career at Kirtland.

With Zschuppe on the roster, the Hornets are 56-9-3 overall with three state Final Four appearances, two state championship games and the school’s first-ever state title.

“At the beginning of the year, each player sets a team goal and an individual goal,” Kirtland coach Ed Bradac said. “Erika’s team goal was to win a state championship for the seniors. Her individual goal was to break her scoring record from the previous year, so mission accomplished. She is truly a special player and deserving of being named the Division III Player of the Year for the state of Ohio.”

Earning the state’s Player of the Year award capped off a surreal week for Zschuppe and her teammates.

After taking a 1-0 lead over Country Day in the first half of the state championship game, the Indians scored two goals within 35 seconds of each other early in the second half.

Zschuppe scored the equalizer two minutes later and then scored the game-winner in overtime. She became just the second player in Division III title game history to score three goals in the final.

“Going into the state championship game, I felt good about it,” Zschuppe said. “I already had it in my head that we were going to win. I dreamt that I scored the golden goal in OT. To actually do that and score the other two goals for a hat trick in the finals was surreal. It didn’t sink in until much later. We did it, we won the first girls’ soccer state championship in school history, and then to win Ohio D3 Player of the Year, I can’t explain the emotions. Happiness, excitement, gratitude; more excitement.”

Despite the graduation of several seniors from last season, Zschuppe was confident the Hornets still had enough firepower to not only return to the state championship game, but to finally get over the hump and win the title.

“After we graduated some key seniors last year, I think everyone thought there was no way we could get to states again, but I knew that we still had some great players returning and I knew we had to keep training and sharpening our skills,” Zschuppe said. “Our summer workouts helped us strengthen our bodies but also helped us strengthen even more as a team. A few games into the season, everyone was commenting on how well we played together. There was more communication, more cohesion, we played as a unit. We wanted to play for each other and when you come together like that, you can make things happen. We were the underdog going into the (championship) game and each one of us played for each other and played our best game of the season.”

Once again, Kirtland will graduate several key seniors but Zschuppe will return with several other starters and key contributors.

And again, the Hornets are dreaming big.

“Each season, you have to build and learn from the last season,” Zschuppe said. “You can’t start the season thinking there’s no way you’ll accomplish what you did last year. Maybe we will, maybe we won’t, but we already started talking about next year. We actually rewatched our state game together on Sunday. We talked about the mistakes we made during the game, what we need to work on for next season, what gaps we need to fill. As a senior next year, I’ll have to lead the way our senior captains did this year. Those are big shoes to fill, but I believe in our team and I believe in our program.”

She has 122 career-goals scored, nearly twice that of Cassie Kiplinger, who is second all-time with 66 goals.