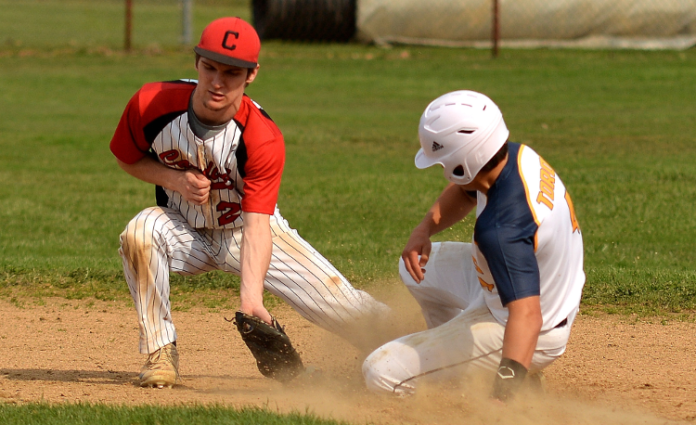 MIDDLEFIELD—Joey Torok’s third-inning single in a 6-2 win at Cardinal on Thursday set the stage for an even bigger accomplishment for the Kirtland senior.

Torok quickly stole second base to record the 100th stolen base of his three-year career.

“It means a lot to me to reach 100 stolen bases,” Torok said. “I’ve been blessed to have started since my sophomore year, so I’ve had a lot of time to reach 100. It’s an awesome achievement but winning the (Chagrin Valley Conference) and districts again is the most important thing right now.”

Torok recorded just five stolen bases in 12 games as a freshman then swiped 30 bases in 24 games as a sophomore. He set a school record for thefts in a single season with 46 last year and already had moved into the top spot in the Kirtland record books for career stolen bases. He has 19 stolen bases in 10 games this spring.

He drew a walk in the top of the first to kick start a two-run inning for the Hornets.

Joey Mongelluzzi and Seann McGill followed Torok with back-to-back singles and Mason Sullivan hit an RBI single later in the inning to give Kirtland a 2-0 lead.

Torok hit a one-out single and scored in the second to make it 3-0 and the Hornets added three more runs in the third.

Nick Ribic started that rally with a one-out single and Reese VanArnhem hit an opposite-field double with two outs to push the Kirtland lead to 4-0. Torok singled home VanArnhem then recorded his milestone stolen base to set himself up in scoring position for Mongelluzzi, who again delivered with a clutch RBI hit.

“We struck out too many times but we also had a lot of clutch hits,” Kirtland coach Luke Smrdel said. “We just have to balance it better. We got the job done and that’s all we can ask.”

“Shank threw a lot of pitches in those first three innings and he was getting beat up,” Cardinal coach Seth Klepper said. “They came out and hit. From 1-9, they’re a solid team. We put Robby in and he settled things down. I was very proud of him. He hasn’t thrown that much this year but we wanted him to eat up some innings and he did.”

Sullivan lost his shutout in the sixth inning when Kale Byler led off the Cardinal half of the inning with a double and scored on Jacob Gotham’s two-bagger. Gotham later scored on an error.

“We were right there,” Klepper said. “We had opportunities and we didn’t take advantage of them when we should have. That’s baseball though. That six-run deficit could have been erased in a matter of one inning but we just didn’t make the plays.”

Torok and McGill both finished with three hits for the Hornets, who improved to 7-3 overall and 6-0 in the CVC Valley Division.

“Overall, it was a solid win,” Smrdel said. “We knew we had to win this one. Coming here to play on the road is tough, especially against a really good team. We swung the bat pretty well but we got caught looking way too many times. We have to protect a little better with two strikes but overall it was a pretty good performance.”

Sullivan improved to 2-1 on the year after allowing just one earned run on four hits.

“Mason pitched a great game,” Smrdel said. “He commanded the zone. He didn’t strike out many guys but he got the ball over the plate and let our defense play and that’s what we expect our pitchers to do.”