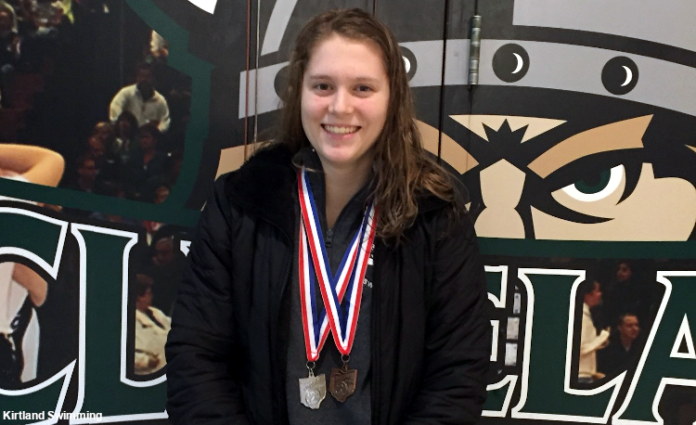 Kirtland junior Kaley Ream last weekend added another accomplishment to her impressive resume when she won a district title and earned a berth to her third-straight state swim meet.

Ream, who placed in two events at the state meet last winter, qualified for the 2021 championships by winning the district crown in the 100-yard Butterfly and placing seventh in the 500-yard Freestyle.

“I went into this meet with the goal of making states in mind and I was more focused on my time than what place I thought I was going to get,” Ream said. “However, when I finished that 100 fly and looked up at the board and saw that I had won, it was an amazing feeling. I immediately looked over to my teammates on the side who were just going crazy with excitement and sharing that moment with them was so much fun.”

She’ll head into her third state meet with a lot of confidence after trimming time in both events. She finished the 100-yard butterfly in 56.42 and the 500-yard freestyle in 5:05.19. While neither of her finals times was a personal best, she was 1/10 away from her mark in the 100 butterfly.

“I’m feeling good that a few more days of resting and taper will allow me to go best times at states though and I’m so excited to get up and race again,” she said.

Ream made some adjustments to her technique after the sectional meet and those moves paid off at the district competition.

“The main thing that I did differently at districts than sectionals in the 100 fly was perfecting my kick count and stroke count,” she said. “I was able to hit all of my turns without gliding or taking short strokes, and I think that went a long way. I also got the second 50 under 30 seconds, which helped a lot.”

She teamed up with Mateja Mrva, Claire Dumstorff, and Payton VanArnhem to finish 13th in the 200-yard Medley Relay with a new school record time of 2:03.05.

“We dropped 3.5 seconds in the medley relay and almost three in the free relay from sectionals,” Ream said. “The relays were probably the most fun part of the meet because everyone on the team was going faster splits than we ever have before and we had a great time breaking our records again, especially by such a large margin.”

The Division II state swim meet begins on Wednesday and Ream will be ready.

Her past experience has helped her to develop a strategy to eliminate the nerves that come with swimming on the state’s biggest stage.

“I’d say that the biggest change I’ve made in the past few years is with my mentality going into states or big meets in general,” she said. “I like to have time goals in mind for myself because there’s really nothing I can do to control what anyone else does when it comes to place. This year, I want to go a 55 in the fly, and anything under 5:00 in the 500, and overall, I just can’t wait to race again with that unique excitement that only the state meet has.”