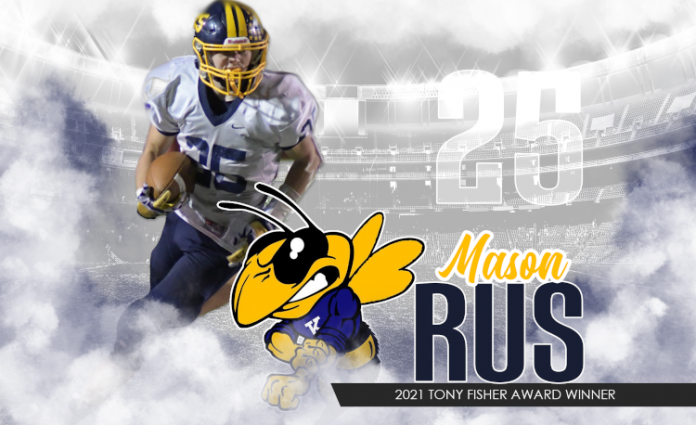 Kirtland’s Mason Rus on Monday accomplished something no other Hornet football player had when he was named the News-Herald’s Tony Fisher Award winner.

Kirtland’s Sam Kukura, Joey Torok, and Mason Sullivan previously were named finalists for the prestigious award but it wasn’t until Rus put together an impressive performance on both sides of the ball this season that the award will make its way to Kirtland.

“It’s just an awesome accomplishment, especially with the talent of those guys who were up there with me who all had amazing seasons themselves,” Rus said of the award named after former Mr. Ohio from Euclid, who went on to star at the University of Notre Dame and then in the NFL.

Rus has played a key role in Kirtland claiming its fifth regional title this season.

Rus, the Northeast Lakes District Division V Defensive Player of the Year, also has been a force at linebacker where he has recorded 120 tackles, including 20 for a loss, and nine pass breakups.

On Saturday, Rus will lead the Hornets into a state semifinal against Ottawa-Glandorf.

“We’re all excited, especially after a big win last week and are ready for these upcoming games against some of the best competition of the year,” Rus said. “Each week, we’re getting better and better at practice and in games. I’d also like to shout out my teammates and coaches. This wouldn’t be possible without any of those guys.”