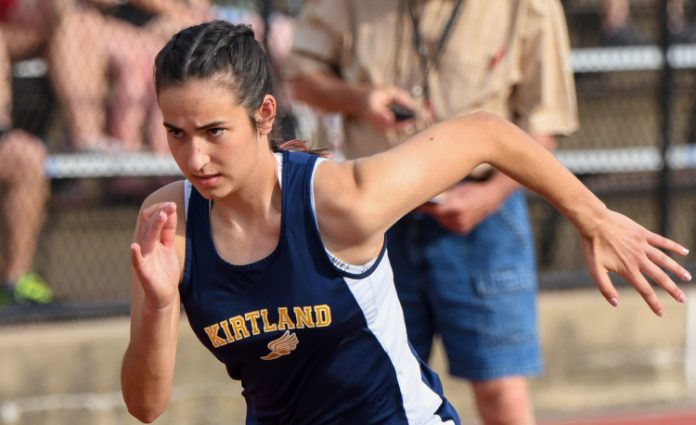 Kirtland’s Reilly Greenlee on Saturday became the third straight Hornet to win the MVP Award at the Cuyahoga Heights Relays.

“I was so excited to receive that award,” Greenlee said. “Coach (J.P.) Moran told me going into my last race that he was going to nominate me because I had three first-place finishes, so I was really just happy finishing off my last mile knowing I could possibly win that. Julie won last year and Jenna a couple of years before, so I’m really proud that I was recognized just like those girls who I’ve looked up to my whole high school career.”

“I think my best was probably the 4×800, even though it wasn’t my fastest race and my legs were way tired from the mile I just ran, but it was a really close race and Sylvia (Vosicky) secured our first-place finish at the very end so it was really awesome,” Greenlee said. “The shuttle hurdles was probably the most fun race I did though because it was different and something new besides the one time I did it last year. I got to run with girls I don’t usually get to and just had a blast doing it and still would have if we didn’t win.”

“I’m really satisfied with my performance,” Greenlee said. “My times weren’t my fastest, but I ran over 2 1/2 miles, had a lot of fun, won some races, and came out with MVP, so I’m really proud of that.”

Will Sayle had a big day in the boys’ relays.

Sayle placed second in the long jump (17-9) and led two relay teams to runner-up finishes and another to a third-place finish.

Despite his success, Sayle felt he could have improved upon his performance.

“I feel like I could’ve done better,” he said. “The key to success was the preparation from the famous head coach, Greg Sayle. I was not very pleased with my mark (in the long jump) because I faulted three out of four times.”

Sayle teamed up with Philip LaVerde, Scotty Haymer, and Warren Eveland to finish the 4×200-meter relay in second place with a time of 1:37.07.

“Me and the dawgs had an incredible 4×2 relay race,” Sayle said. “The performance of me, Scott, Phil Man, and Wardog was incredible.”