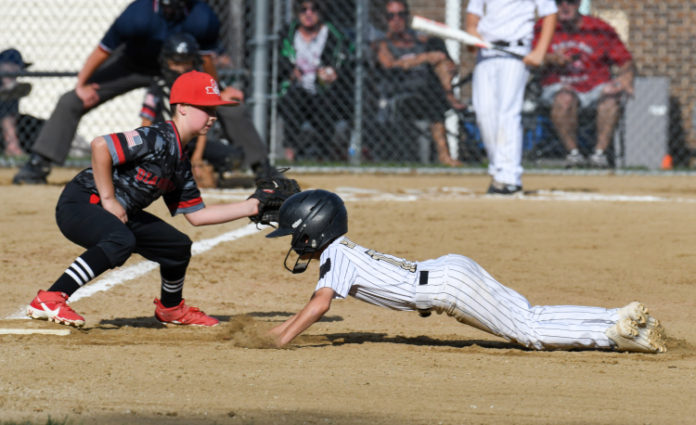 MUNSON TOWNSHIP–Turner Hejduk smashed three doubles and knocked in two runs but it wasn’t enough as the Geauga Knights 10U squad fell to the visiting Mentor Diamond Dogs in a key Buckeye Baseball League Ruth Division game on Tuesday at Vetter Field.

With the win, the Diamond Dogs improved to 8-1 and remain in the hunt for the division title behind the Cleveland Buckeyes, who are 10-1. The Knights dropped to 8-3.

Ryan Shaffer (Chardon/St. Mary’s) started the game for the Knights and shut the Diamond Dogs down in order in the top of the first inning. Shaffer struck out the first batter he faced and coaxed a groundout from the next two.

Mason Rivera (Chardon) then drew a one-out walk in the bottom of the first and swiped a pair of bases before Hejduk sent a towering shot into right-center for a 1-0 lead.

Shaffer walked the first Diamond Dog he faced in the second but he buckled down and stranded that runner at second to preserve his team’s one-run advantage.

Alex Downing (Riverside/NDCL) hit a one-out single in the bottom of the second and Jeremiah McPadden (Eastlake/Mater Dei) drew a two-out walk but the Knights couldn’t get the clutch hit and left runners at second and third.

A two-out error led to two Diamond Dog runs in the third.

Shaffer battled back and stranded a pair of runners at second and third.

Rivera drew a one-out walk in the bottom of the third but was picked off first base. Hejduk hit his second double of the game but was left at third base.

McPadden relieved Shaffer in the fourth and struck out the first batter he faced. A walk led to another Diamond Dogs run, pushing their lead to 3-1.

The Diamond Dogs put two more runners on in the fifth but McPadden ended the threat to keep his team within striking distance.

Mentor broke the game open in the sixth.

A walk and a double made it 4-1 and two more walks loaded the bases. A one-out single pushed the Diamond Dog lead to 6-1.

Thomas Skytta (Cardinal), who relieved McPadden earlier in the inning, worked his way out of the inning.

Grant Brugger (Chagrin Falls) gave the Knights some hope when he opened the bottom of the sixth with a single. Hejduk then stepped into the batter’s box with one down and delivered his third two-bagger of the night to cut Mentor’s lead to 6-2. Skytta drew a walk but a flyout and strikeout ended the game.

Shaffer threw three innings for the Knights. He allowed two runs without yielding a hit and struck out three. McPadden allowed four runs on two hits and fanned three, and Skytta allowed just one hit in one scoreless inning of work. He struck out one batter.

Hejduk was 3-for-3 with two runs batted in to lead the Knights’ offense.

Brugger and Downing also had hits for the Knights.

The Knights are back in action on Tuesday as they travel to Lyndhurst for a night game against the Lightning at 8:00 p.m.

Eagles look to build on past success