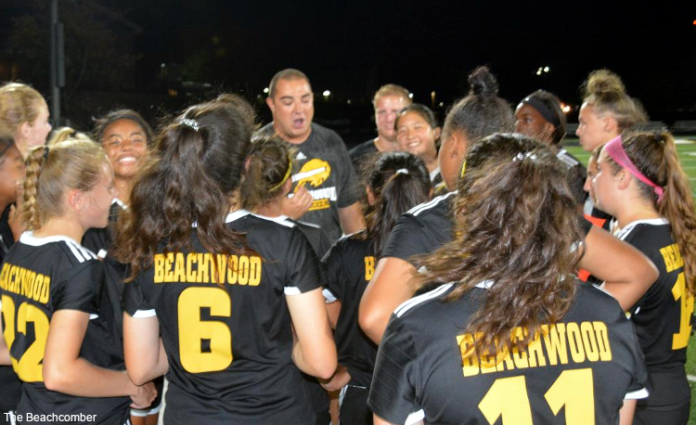 After leading Beachwood to its two best seasons in recent history, Jonathan Kostoff is ready for another challenge.

The 2018 News-Herald Girls Soccer Coach of the Year was announced on Wednesday as the new head coach at Kenston. The Bombers have won back-to-back Western Reserve Conference titles.

“It is not often a coach has the ability to take over a program at any level that is coming off the heels of back-to-back conference championships,” Kostoff said. “I really needed a coaching job that would allow me to practice at nights more often than not due to my work schedule. I also got to see Kenston play twice last fall since we were in the same Division II Chagrin District as them. I was extremely impressed with their entire group, especially their quick tempo, off-the-ball movement and how unselfish each player was. The schedule, the returning underclassmen talent and extremely strong youth system helped sway my decision to come to Kenston. It was a perfect fit for me. I am extremely excited to be in Bomber Country.”

The back-to-back winning seasons were the first for the Bison in over a decade.

“I am beyond proud of all the record-breaking success we accomplished at Beachwood,” Kostoff said. “Winning 24 games over two years including, a school-record 15 wins in 2018, will always be a highlight for me. We broke so many records including winning our first sectional championship, most goals in a season and most shutouts in a season. The girls bought in from Day 1 that we could change the narrative of a losing culture without much success in the past. We enjoyed back-to-back winning seasons for the first time since 2007-2008. We truly all worked together to build something special at Beachwood. The future is extremely bright for the Bison with the junior scoring tandem of Romi Roth and Sydney Sarver leading the way up front and senior goalkeeper Madison Prince anchoring a strong defense.”

Unfortunately for Kostoff, the Coronavirus shutdown didn’t allow him to personally meet with his former players to share with them the news of his departure.

“I ended up having to tell them via email,” he said. “We were all going to meet Monday, March 16 so I could tell them in person before the news of my departure was made public. It broke my heart not to be able to bring the group together one more time. The reaction I received included so many messages of gratitude for all that we accomplished together. I love all of the returning and incoming players at Beachwood and truly want to see them succeed for many seasons to come. I will always be their biggest supporter and look forward to seeing them play this fall.”

With seven returning starters, including second-team All-Ohioan and WRC Player of the Year Skylar Cornell and four other all-conference performers, Kostoff inherits a Kenston program filled with talent.

The job comes with very high expectations and Kostoff is ready to tackle that challenge.

“Kenston girls’ soccer is in the best position in school history and the excitement in Bomber Country is palpable,” Kostoff said. “We plan to chase three goals this fall: Win a third consecutive WRC championship, compete for a district title and beat rival Chagrin Falls for the first time in nine years. It is also not about the success of a few seasons. Our coaching staff and players will dedicate a lot of time to building sustained success through our youth systems—Kenston Futbol Club and Kenston Community Education. Bombers fans can expect a program that will consistently be a powerhouse in Northeast Ohio.”

The Bombers return 14 players who either scored at least one goal or recorded an assist. Senior goalkeeper Natalie Adante also is expected to return in the fall after suffering a preseason injury in 2019.

Kostoff’s immediate focus is to get to know each player in an effort to come together as a new, cohesive unit.

“First and foremost, it starts with meeting each player and getting to know them, not only when it comes to on the field, but more importantly, who they are as a person,” Kostoff said. “I am so excited to build a relationship with each player prior to ever stepping on the field. Once the summer rolls around, we are going to hit the ground running to improve technically, tactically and physically both in the weight room and conditioning. I’ve always said success is built through team chemistry and hard work. Our group will be thoroughly prepared for each game through on-field training, video review and scouting.”

No rebuilding for the Bison