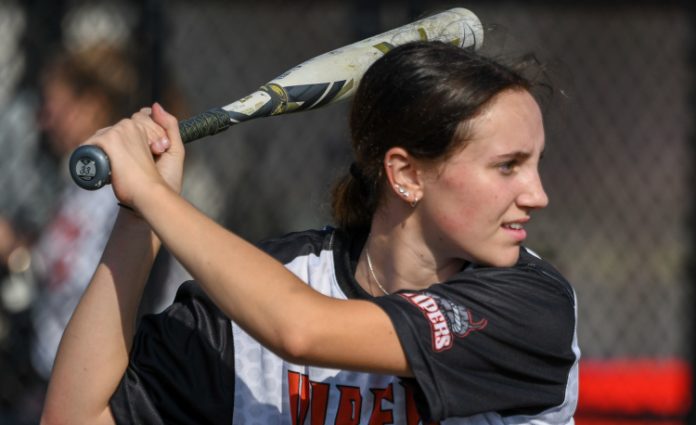 Emma Kovalchuk was 8-for-11 with five extra-base hits in leading the Vipers 18U team to a 3-0 start at the Greg Miller Memorial Tournament in Findlay on Saturday.

The Vipers opened the day with a 6-0 win over the NW Ohio Blackhawks Vengeance and then closed out pool play with a dominating 17-1 win over the Wizards.

“It felt absolutely amazing being able to be on the field again, especially with some teammates that I’ve been playing with since I was 12,” Kovalchuk said.

Against the Blackhawks, Kovalchuk was 2-for-4 with a home run and she knocked in four runs.

Bella Carcioppolo also finished the game with two hits and she scored three times. Gianna Cantini doubled in the game and Megan Mlinaric threw a one-hit shutout and struck out eight in seven innings.

The Vipers scored early and often against the Wizards.

A four-run first was followed by a three-run second. They added three more runs in the fourth and seven in the fifth to invoke the run rule.

“We really fed off of each other and kept the rallies going,” Kovalchuk said. “We didn’t leave very many runners on and put the ball in play when needed.”

The Vipers recorded 17 hits in the win.

Cantini picked up the pitching victory after allowing one unearned run on one hit with a pair of strikeouts.

After earning the No. 1 seed in bracket play, the Vipers opened the double-elimination seed with a 13-4 win over the 3P Lady Irish.

After allowing one run in the top of the first on a walk and a single, the Vipers responded with four runs in the bottom half of the inning and five in the second to take early control of the game.

Kovalchuk once again pounded the ball. She finished 3-for-3 with two doubles, a triple, two runs scored, and four RBI. She finished the day with 11 runs batted in.

“I fed off my team’s energy and really focused on my fundamentals and timing,” Kovalchuk said.

Guess, Mlinaric, Cantini, and Hancock each had two hits for the Vipers. Cantini’s both were two-baggers.

Mlinaric earned the pitching with. She allowed four runs on eight hits and fanned four.

The Vipers advanced to play JABC Riot at 11:30 on Sunday.

“We’re on a winning streak and we’re all excited to be out there and competing again,” Kovalchuk said.

The Vipers 16U team also earned the No. 1 seed entering bracket play after finishing pool play with a 1-0-1 record.

The Vipers opened the tournament with a 6-6 tie against the Blackhawks OG and then beat LoCo Aftershock, 9-6.

They opened bracket play with a disappointing 6-5 loss to NOW Lady Irish Gold. The Lady Irish scored three runs in the bottom half of the sixth and then held off a Vipers rally in the seventh to seal their win.

Macey McGhee led the Vipers at the plate.

She was 4-for-8 with a pair of doubles and three runs scored.

Olivia Sacks and Izzy Coode both contributed with four hits. Sacks knocked out two doubles and Coode homered and knocked in a team-high five runs.

Lilly Jarc, Lily Prebul, and Elena Scott each doubled for the Vipers.

The Vipers will play Blackhawks OG again in the first round of the consolation bracket on Sunday.

Kirtland rallies for win at Berkshire