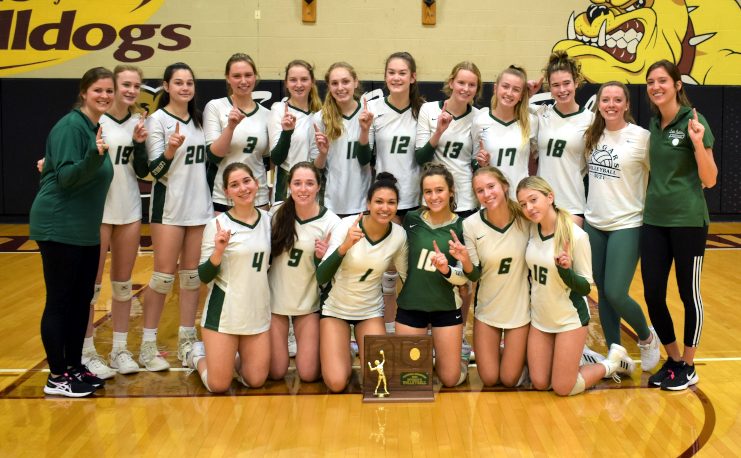 The Cougars finished the 2021 campaign 22-6 overall and 9-1 in the Crown Conference. They cruised to the Final Four with big wins over league rivals NDCL and Beaumont before falling to eventual state champion Gilmour Academy in the state semifinals, 3-1.

Not only does Lake Catholic return most of its roster from 2021, but the Cougars also dropped to Division III and immediately become one of the favorites to win the state title later this year.

“We expect to win a D3 state championship,” said Lake Catholic coach Kara Oster. “We also expect to win our league, and despite our tough schedule, we will aim for a record with less than five losses.”

“In just one year, we have gone from being a young team with ‘underdog’ expectations to being an experienced team with a goal of nothing less than winning a state championship,” Oster said. “With more of a spotlight on the Cougars this year, we are excited to show what we are made of, and, as our 2022 team motto says, to leave no doubt that we are the best team on the court.”

While Lake Catholic did graduate two key players from their roster—Eastern Michigan signee Jessica Wilson and Caitlin McCrone–and have another key player out indefinitely with a knee injury, the Cougars have plenty of returning talent to fill those holes.

“We lost two seniors last year, and although that is a small number, they played a big part,” Oster said. “Our starting outside Jessica Wilson was our main attacker and a leader on the court. Caitlin McCrone provided stability and composure with her serving runs and energy on the middle and right side. We also have a to-be junior, Mia Schaefer, out with an ACL/meniscus injury. We plan to fill these holes with the strength of pin hitters Katie Sowko and Natalya Bergant, and the leadership of our returning upperclassmen.”

“(Sowko has) eloquence and grace on the court unlike any player I’ve seen,” Oster said. “(Bergant is) our not-so-secret weapon on the right side; every coach’s dream.”

Lake Catholic has plenty of weapons that aren’t a secret including junior setter Hannah Pattie, who earned honorable mention All-Ohio honors last season. She also was named the Crown Conference’s Setter of the Year and first-team all-district and News-Herald honors.

“(She is) the backbone of our team,” Oster said.

“(Walnsch is) our dark horse who does her job and remains composed always,” Oster said. “(Briganti is) the spitfire every back row wishes they had and a leader by word and example. (Slogar is) the ultimate teammate who can play under pressure and get any job done that is asked of her.”

Duricky, an outside hitter/middle, posted just five digs and four kills as a sophomore but she brings a boatload of athleticism to the court.

“(She is) one of the most athletic girls I have ever seen step on a volleyball court and the jack of all trades,” Oster said.

“(Oster’s) defense has the power to keep us in a game, while her serve has the power to completely take the game over,” Coach Oster said. “(Budrys Rini) has the speed and agility you do not see often in a middle and it is electric”

Vanjo recorded 14 kills and 13 blocks last season. She will line up outside, opposite, or in the middle. Gerred will play on the outside or opposite side.

“(Vanjo is) a strong athlete who plays with no fear,” Oster said. “(Gerred) can throw down the hammer with ease from either pin.”

Powaski is an outside/opposite side hitter, Spies is a defensive specialist, Schroeder is a setter/DS, and Schaefer is an outside hitter. She recorded 148 kills and 173 digs as a sophomore but will miss part of the season as she recovers from a knee injury.

“(Powaski is) the spark of energy every team needs, playing with the fearlessness of a champion,” Oster said. “(Spies is) the most positive ray of sunshine on our team with a killer serve and instinct to the ball. (Schroeder is) always willing to do her job and go all out when the game is on the line. (Schaefer is) one of the most strategic and coachable players I’ve had the pleasure to work with, capable of executing instruction midair.”

Avery Budrys Rini is a middle blocker and outside hitter. She recorded seven kills as a freshman.

“(She) can slice the ball with power every which way and always plays with a sense of calmness,” Oster said.

Lake Catholic is deep and talented but to achieve their goals, the Cougars must stay true to their system and play confidently throughout the run to Dayton.

“Our bread and butter is serving tough and passing well,” Oster said. “We also need to spread our offense out in order to have contributions from all hitters.”