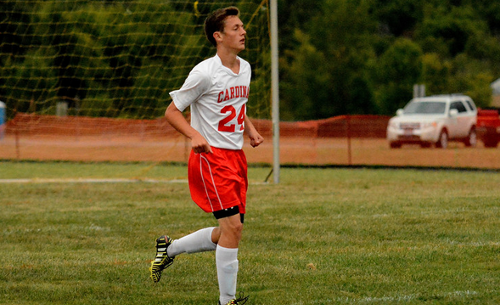 MIDDLEFIELD—With five players out of the lineup due to injury and another handful playing at less than 100-percent, the Cardinal soccer team has every reason in the book to look ahead to the off-season.

Instead, the Huskies continue to play inspired soccer.

Jake Revak’s penalty kick pulled the Huskies into a 1-1 tie with visiting Garrettsville Garfield on Monday but the G-Men scored a goal with 5:52 left in the game to pull out a 2-1 win.

“I have not seen a team with a better spirit than our team has,” said Cardinal assistant coach Kristin Dhayer. “We have a lot of injuries. We have players that are sitting out and we have players that aren’t 100-percent. They’re not letting it get them down. They pull together and they work hard.”

Garfield led 1-0 at halftime but the Huskies showed late in the first half they weren’t going to lay down and concede the loss.

Cardinal outworked the G-Men in the second half but couldn’t convert on several scoring opportunities.

“They just wanted it,” Dhayer said. “They realized they wanted it. They had the skill. We made a couple lineup adjustments and moved some people in different spots. They just went out and did their best.”

Revak broke through the Garfield defense and was on his way to a one-on-one with the goalkeeper when he was tackled from behind to set up his penalty kick.

He beat the keeper to the right corner to tie the game with 15:29 left to play.

“They started out flat but got better toward the end of the first half,” Dhayer said of the Huskies. “In the second half, it was all in. We had an unlucky goal in the second half unfortunately, but we saw our team step up. They pulled together and did their best. We couldn’t be prouder of them for that.”