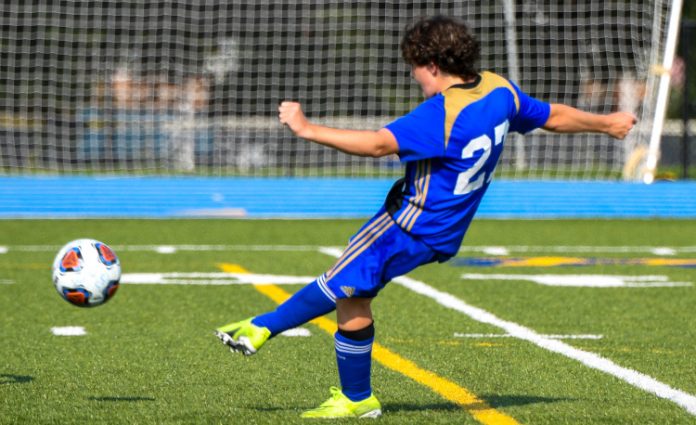 Khalil McDonald’s goal with just over a minute left proved to be the game-winner in Independence’s 2-1 non-conference win at Andrews-Osborne Academy on Thursday.

The Blue Devils led 1-0 before Andrews tied the game off of a corner kick. McDonald scored off of a Casey McGhee corner kick with 1:20 left to play.

“They were very good,” said Independence coach Ryan MacRaild of Andrews. “They played a different style than we were used to seeing and they played in a different formation. They gave us a lot of different looks that we had to deal with, which is going to help us.”

Aidan Coljohn gave the Blue Devils their first advantage early in the first half when he and Emmett Stralka found a seam in the defense.

“Emmett had a nice push and it kind of snuck through,” MacRaild said. “Coljohn hit it in.”

Andrews responded five minutes later and the game remained that way until McGhee served up a corner kick and McDonald put the finishing touch on it.

“Casey hit it near post and it kind of squibbed out to the top of the box at an angle,” MacRaild said. “Khalil got there and hit it inside the far post. That was huge. After that, we just scrambled to keep the ball out of the net.”

With the win, the Blue Devils improved to 6-1 on the year.

“Our defense was a little shaky,” MacRaild said. “They had a lot of chances on goal but luckily couldn’t find the back of the net too often and we made the most of our chances. We didn’t have a ton but we got our two and that’s all we needed.”