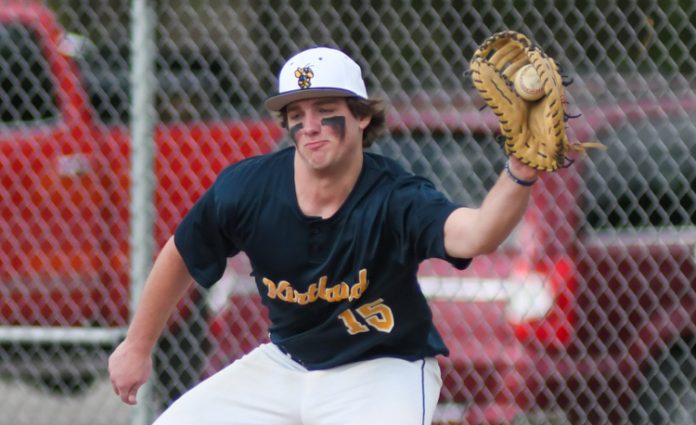 Kirtland scored five runs in the top of the seventh inning to beat host Berkshire on Tuesday, 12-8.

With the win, the Hornets sealed a season sweep of the Badgers after beating them at home on Monday, 13-2.

“We gave them seven runs in the sixth inning there but we came back and had good approaches and got runners on base and got the job done,” said Kirtland coach Luke Smrdel. “They were patient at the plate and knew what they had to do. They took their time to get good pitches and put the ball in play.”

Kirtland led 5-0 in the fifth inning but the Badgers scored one in the bottom of the fifth. Kirtland responded with two runs in the sixth but Berkshire scored seven in the bottom half of the inning to take an 8-7 lead into the seventh.

Tyler Turk started the rally with a one-out single and Tommy Gogolin was hit by a pitch. Gage Sullivan hit an RBI single to left that tied the game.

Berkshire then intentionally walked Pierce Boyd to set up a force play at any base and Luke Chuko made the Badgers pay with a two-run single to left. Steve Withrow cleared the bases with a triple.

“I’ve been struggling to hit the ball recently, so I worked on my swing these past few weeks with my coach, and today showed the work is paying off,” Withrow said. “My approach was the same as always. I tried to make solid contact with the ball. That time, I was able to hit the ball hard into right field.”

Withrow and his teammates knew their mistakes in the sixth inning could cost them a win. They went into the seventh inning confident they could put together a game-winning rally.

“We made some mistakes in the field,” Withrow said of Kirtland’s three errors in the sixth inning. “But we knew we had to have a short memory to have a chance at coming back. We took advantage of every at-bat.”

“Pierce got the start and pitched well,” Smrdel said. “We brought in Mason and we made a couple of mistakes in the field. Fortunately, we were able to pull it out but we’ve got to limit those mistakes moving forward.”

Chuko, Rus, and Withrow each collected three hits for the Hornets, and Rus and Withrow both knocked in three runs. Sullivan, Trip Thaler, and Turk each had two hits in the win.

With the win, Kirtland improved to 11-8 on the year. The Hornets travel to Wickliffe on Wednesday.