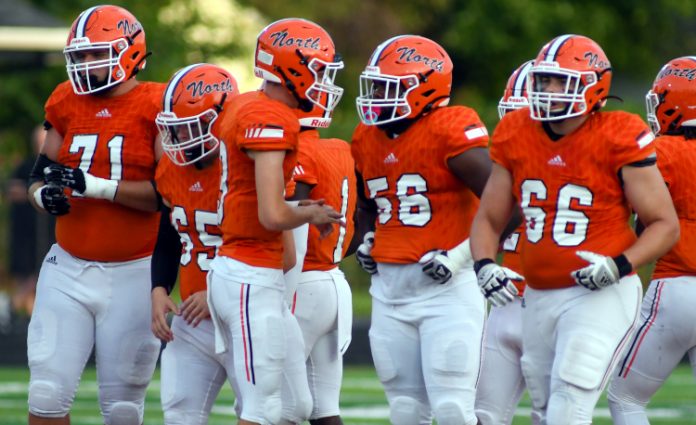 Kenston used an explosive play late in the game to spoil North’s upset bid in a Western Reserve Conference showdown on Friday.

After North scored a touchdown to go ahead, 28-24, Nikko Georgiou connected with Sean Patrick on an 80-yard touchdown with 2:06 remaining in the game.

“We played pretty well for the most part but we still have some stupid mistakes that we can’t keep shooting ourselves in the foot with,” said North coach Shawn Dodd. “It’s not a guy getting beat or a great scheme, it’s just mistakes that we’re making and we’re not good enough to do those things. Overall, they played hard and they want to win. They really give us everything they’ve got, it’s just a matter of cleaning up the mistakes.”

Patrick scored on a 32-yard touchdown run to give the Bombers an early 7-0 lead. North responded with an efficient drive into Kenston territory but Patrick picked off a pass and returned it to the North three. Toran Savransky scored to push the Bomber lead to 14-0.

The Ranger answered with a 10-yard touchdown run set up by a Derek Martinez 70-yard run.

Curtis Thomas scored on a four-yard run to pull North to within 17-14 at the break.

North opened the third quarter with another efficient drive and Martinez scampered into the end zone on a nine-yard run to give the Rangers their first lead, 21-17.

Kenston quickly regained the lead on a 40-yard pass from Georgiou to Tymir Cardona.

Zach Rummel matched his Kenston counterpart with a 55-yard touchdown pass to Thomas to open the fourth quarter with North on top, 28-24.

“The kids felt like that had this one and I hate to use the word ‘should,’ but this was one we could have won,” Dodd said. “But, if we get a fourth-down stop and kick the field goal, there’s a 10-point swing. It’s just the simple things. They had no answer for us offensively, we did whatever we wanted.”

That set up Georgiou’s game-winning 80-yard touchdown pass to Patrick.

The Rangers, who fell to 0-4 overall and 0-1 in the WRC, host rival South on Friday.

Despite entering the rivalry game winless, the Rangers had their best offensive game of the season at Kenston and hope to play a cleaner game against the Rebels.

“We’re getting there but we’re still not good enough yet and we’re still making mistakes,” Dodd said. “This is the third time we’ve given up a last-minute drive which is disappointing because as much as the offense has struggled, we’ve had opportunities to win and three out of our four losses have been on the last drive of the game. We’ve got to execute better and stop shooting ourselves in the foot.”

South has won the last three meetings between the neighborhood rivals but two of those games were decided by a total of nine points.

The Rangers have the opportunity to salvage their season with a rivalry win.

“We try not to build it up like it’s the Ohio State-Michigan rivalry,” Dodd said. “The kids already have a chip on their shoulder with the North-South stuff and we try to bring it down a little bit so the kids can play calmer.”