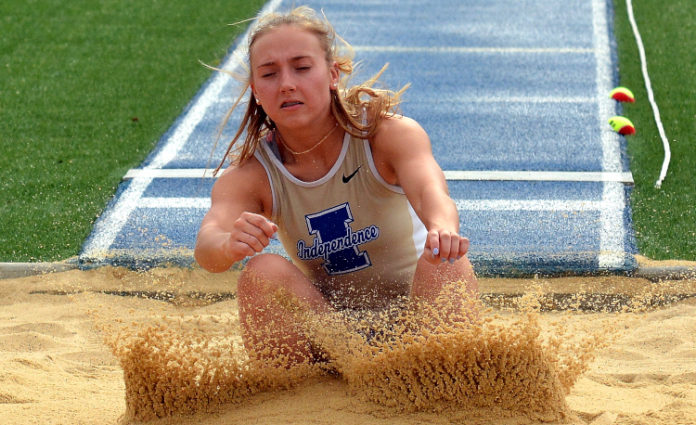 Independence’s Skylar Leighliter and Madison Stepanik both set new personal records in placing in multiple events at the Trinity Invitational on Saturday.

Leichliter won the 100-meter hurdles, finished second in the long jump, and placed fourth in the 300-meter hurdles. She missed out on qualifying in the pole vault.

“Pole vault did not go as I planned, but overall, I am happy with how myself and the team performed,” Leichliter said. “I went in with a clear mind and knew I could trust my training. I have been putting in a lot of time learning to three-step all my hurdles, so I felt prepared and confident in myself.”

Leichliter finished second in the long jump with a leap of 14-feet, 9-inches.

“I was hoping to jump in the 15s today but fell a little short,” she said. “I am happy with second place, but I still have room to improve.”

Stepanik recently set a new school record in the shot put and on Saturday, she set her own personal record in the discus with a throw of 109-feet, 2-inches, good for first place.

“Disc was my best event today,” Stepanik said. “I knew I had some tougher competition and the girls threw farther than what I’m used to competing against so I knew I really had to focus and sling one out there.”

She finished second in the shot put with a toss of 33-feet, 9 ¼-inches.

“Overall, I was satisfied with how I did in disc but I felt I could have thrown better when it came to shot,” Stepanik said. “Going into practice, I’m determined to becoming consistent in throwing farther.”

Stepanik also placed fourth in the high jump when she cleared 4-feet, 10-inches.

Throwing the shot and discus while also competing in the high jump is an odd combination but Stepanik makes the most of her unique event lineup.

“At times, it’s overwhelming just because the throws and jumps happen at the same time but I really enjoy doing several field events,” she said. “I don’t know of many who do both but I’m glad I have the opportunity to do them.”