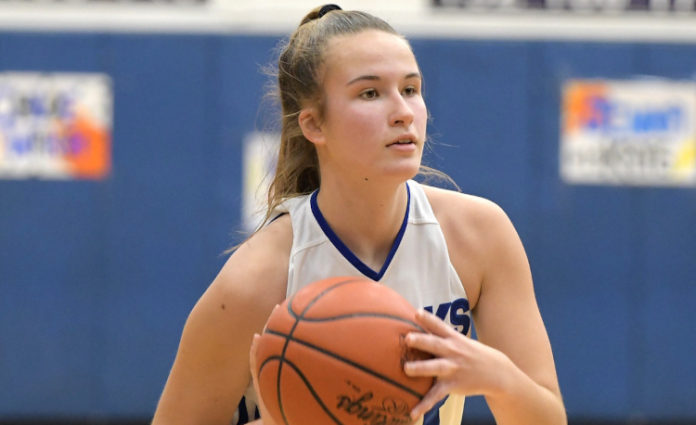 Lewanski, who was tasked with guarding Lakeside standout Hailee Aguinaga, scored 13 points and held the Lakeside big to just 10 points.

“I give Payton Lewanski a lot of credit,” said Madison coach Tedd Wagner. “She really battled her. Payton probably played 22 of the first 24 minutes and it was her sole job to box her out and work and I think she made her work very hard for every point she got. She did kill us a little bit on the boards but it wasn’t for a lack of effort. Payton really put a good effort into boxing her out on every possession.”

Lewanski helped fuel that run with her effort on both ends of the court.

“Lakeside likes to push their zone out towards half court, so a couple of times we zipped the ball around and Payton got some nice looks from 8-10 feet, which is her sweet spot,” Wagner said. “She also got to the line a few times. She’s really been playing with a chip on her shoulder, which is a good thing.”

Lewanski used her past experience playing against Aguinaga to her advantage.

“I’ve played her in the past and I knew that she would be a physical opponent,” she said. “Positioning, for me, was key for rebounding. It was a bit more challenging than some of my matchups this year; however, it was great competition.”

Offensively, Lewanski made the most of her scoring opportunities.

“I took advantage of a lot of open shots and worked to create some good looks for myself and my teammates,” she said. “Much of my defensive effort transitioned to the other end of the court.”

Riley Montagner led all scorers with 16 points and Alyssa Lavdis contributed to the win with nine points.

Madison, who improved to 3-4 overall, will put its two-game winning streak on the line on Wednesday when Western Reserve Conference leader Brush pays a visit.