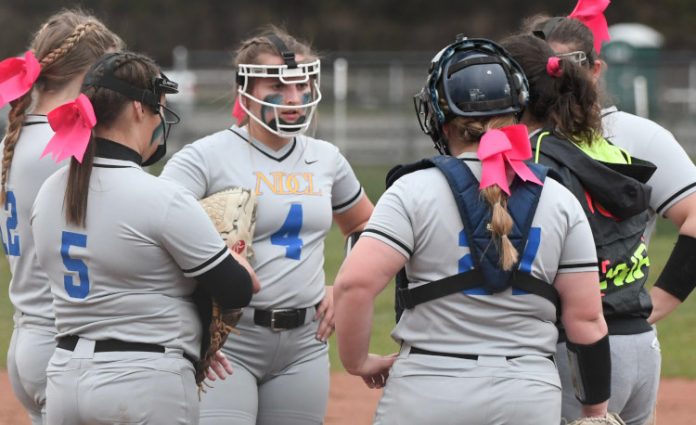 After a run-rule loss to Walsh Jesuit on Tuesday, the NDCL Lions regrouped and rolled over Padua on Thursday, 10-1.

The Lions got off to a slow start but scored three runs in the bottom of the third and four in the fourth to pull away from the Bruins.

“I think that getting the win was extremely important for us as a team,” said NDCL junior Sophia Rowan, who had two hits and knocked in three runs. “We didn’t play our best in that loss, and you can’t do that against the great teams. We were definitely more focused today and it showed. We played well and got the win, and we feel like we are back on track.”

Padua took a 1-0 lead in the top of the first on a single and three errors.

The score remained the same until the third when the Lion bats came alive.

Jeanna Sukey hit a one-out double to get things going and Lucy Joyce singled her home to tie the game. Madi Dutton then singled and Rowan hit an RBI single. Celia Anthony, who ran for Dutton, scored on a fielder’s choice later in the inning.

Sukey started the fourth-inning rally as well as she drew a two-out walk and Joyce followed with an RBI single. Dutton then doubled to put runners on second and third for Rowan, who delivered another RBI single. Ava Morano then singled Rowan home to increase NDCL’s lead to 7-1.

The Lions closed out the scoring with three runs in the sixth.

Dutton led the Lions at the plate. She finished 4-for-4 with a double and a triple, one run scored, and one RBI. Joyce was 3-for-4 with three runs and two RBI. Rowan and Baeslach both finished with two hits while Rowan knocked in a team-best three runs.

“When I stepped into the box, I told myself to wait back and make solid contact,” Rowan said. “The pitching wasn’t too fast, so I focused on keeping my hands back and staying on the same plane as the ball.”

The Lions pounded out 13 hits, which was more than enough for Dutton, who struck out 11 and allowed just one run on five hits in seven innings.

“There is no better feeling than when everyone on the team is producing and getting runs across the plate,” Rowan said. “When the team is succeeding, it makes it much easier to relax, which takes some of the stress out of the game.”

NDCL will host Beaumont on Saturday in a Senior Day celebration beginning at 9:30 a.m.