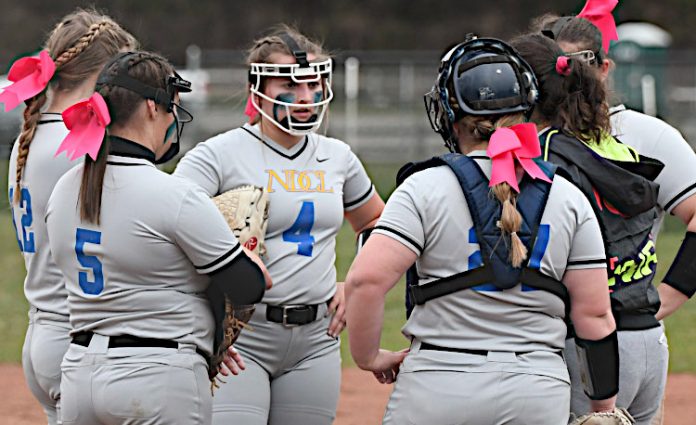 The Notre Dame-Cathedral Latin Lions split a pair of games during a spring trip to Pigeon Forge, Tenn.

NDCL opened its trip on Tuesday with its first loss of the season, a 4-3 extra-innings setback to Fairport High School out of New York. The Red Raiders finished as the Class AA state runners-up last spring.

After having Wednesday’s contest canceled, the Lions concluded their trip with an 11-1 five-inning win over Notre Dame Academy out of Staten Island, N.Y.

“It’s cliché and you hear a lot of the top college coaches say the same thing, but it’s the truth, you have to have a short memory,” said NDCL coach Tiger Alexander of NDCL’s bounce-back win. “You’ve got to be able to make some adjustments and learn from the loss.”

Fairport pushed across one run in the eighth inning while the Lions had a runner picked off third to end the game.

The Lions responded to their first loss of the season with a dominating run-rule win on Thursday.

They jumped on the Gators early as they posted five runs in the top of the second inning.

Ava Morano started the rally with a one-out single and then Lexi Simon singled and Alex Tanner walked to load the bases. Lucy Joyce followed with an RBI single and Jeanna Sukey hit a sacrifice fly. Giana Messina, Madi Dutton, and Sophia Rowan closed out the inning with back-to-back-to-back singles.

Morano was hit by a pitch to start the third and Simon hit an inside-the-park home run to right field that increased NDCL’s lead to 7-0.

“The loss on Tuesday was tough,” Dutton said. “We fought till the end but came up short. We were all upset because we knew that game was ours. The win today allowed us to completely forget about the loss and show everyone who we are. It was very important to get this win today so that we carry on a positive presence for our future games and take the momentum with us.”

NDCL pounded out 15 hits in the win including the three home runs.

“I knew the pitcher wasn’t overpowering and I had to sit back on the ball, Dutton said of her fifth-inning homer. “I noticed where the fielders were and focused on hitting the gaps. The whole team was crushing the ball. I came up to the bases loaded two or three times.”

She also shut down the Gator offense.

Dutton allowed just one run on one hit and struck out six.

“Knowing I had my team behind me offensively and defensively allowed me to have fun with the strike zone,” she said. “I didn’t have to worry about a hit or walk because I had my team making up for it. I forced them to chase the ball out of the zone not giving them too much to hit. The fifth inning, I was struggling with my grip and coming off a collision with a player on the other team but my team was behind me to make up for it.”

Dutton was 4-for-4 with two runs scored and she knocked in three runs. Rowan, Morano, Simon, and Tanner each finished the game with two hits, and Rowan, Baeslach, and Simon each knocked in a pair of runs.

“It was a nice balanced attack,” Alexander said. “We’ve been tweaking the lineup a little bit and trying to stretch it out and get more balance. We worked really hard on that in practice and it was good to see things develop on quick adjustments like that.”

With the win, NDCL improved to 4-1 on the year. The Lions host Lake Catholic on Monday.