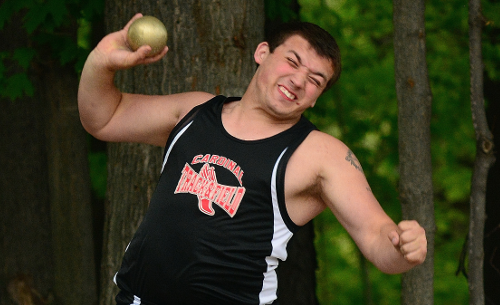 A handful of athletes already have punched their tickets to regionals after the first day of the Division III district meet at Independence on Wednesday.

The final day of the district meet will take place on Friday.

Peters threw the shot put 44 feet, 8 ½ inches to finish third overall. Armstrong cleared 12 feet on the pole vault to finish third and the Independence 4×8 team finished second with a time of 8:22.98.

Kirtland’s Kevin Cummings (1600-meter run and 800-meter run) and Peter Gabor (800) advanced to the finals along with the boys’ 4×100 and 4×200-meter relay squads. Chaz McPeak, Alex Weaver, Dylan Aquila and Antonio Rini competed in the 4×1 while Rini, Gabor, Johnathon Guenther and McPeak rounded out the 4×2 squad.

Cardinal’s girls’ team finished the first day in sixth place while the Huskies were in eighth on the boys’ side. Independence’s and Kirtland’s boys’ teams were seventh and ninth, respectively.