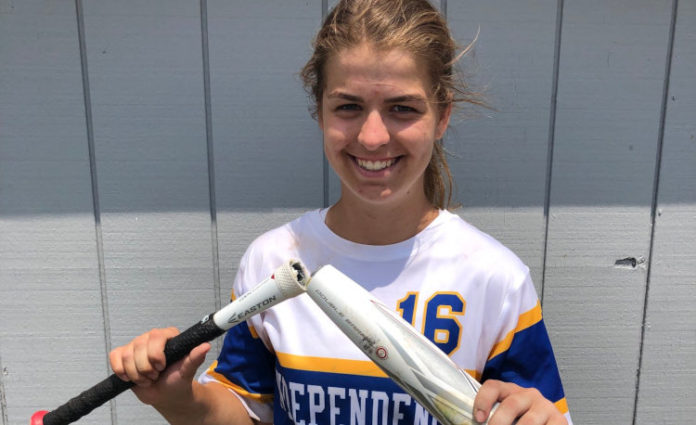 Independence’s Ashleigh Porter is known for her hard work and preparation.

Those attributes led to her selection to participate in the 2021 Ohio Fastpitch Coaches’ Association Underclassmen Tournament at Pickerington Central High School earlier this week.

They also prepared her for an unfortunate incident in her first at-bat of the Northeast team’s second game.

“I remember being down in the count,” Porter said. “I noticed that (the pitcher’s) throwing pattern was outside and inside pitches back and forth. I jammed myself a little bit with the inside pitch that I hit. As soon as I made contact with the ball I immediately felt my bat break. I didn’t run right away because I was so shocked. Luckily, I brought an extra bat just in case.”

The broken bat was the only downside for Porter during the two-day event.

“It was really cool,” she said. “I got to meet a bunch of new people and actually make friends with people we played in high school. It was nice.”

Porter previously tried out for the all-star event as a freshman. COVID wiped out the 2020 season, so she was down to her final attempt to play in the prestigious event that pitted teams from each of the six regions in Ohio.

A three-day tryout was held at Barberton High School two weeks ago.

Despite pitching nearly every inning for the Blue Devils this season, Porter opted to try out as a second baseman as that is the position she plays on the summer circuit.

That decision paid off as she earned a roster spot.

Porter was pleased with her performance but the highlight of the tournament was playing with some of the girls she competed against this season and meeting other outstanding underclassmen from around Ohio.

“It was really exciting because you get to basically see all these girls from all over the state and see the competition and see how you match up against them,” she said. “I think I could have hit better but I did pretty well fielding. I had a couple of double plays, which I was happy about. It was a lot of fun.”

Porter was one of three local players that represented the Northeast region in the event.

Dutton, a Florida Tech softball commitment, was thrilled to represent the area and to meet other top underclassmen from around the state.

“It was super exciting to be chosen for this event,” she said. “I was so excited to meet and play with our area’s best players.”

While she wasn’t as consistent in the circle as she’d have liked, she certainly contributed at the plate. She hit a two-run home run and also had a triple among her hits.

“I had good innings and bad innings pitching,” she said. “It was nowhere near my best but I made up for it offensively. Even on my good days I am not satisfied, so I was definitely not satisfied with my performance at this tournament.”

Heading into her senior year, Dutton is better prepared to be a team leader for the Lions next spring.

“I learned the importance of communication, especially when playing with players I was unfamiliar with, and being more proactive with the communication,” she said. “Most importantly, I am taking away the new friendships I made.”

DiPierro was one of the key players in Harvey’s run to its first league championship in two decades.

After competing in the underclassmen tournament, she’s now ready to lead the Red Raiders to another successful season.

“There were a lot of really good girls there and that helped my skills and my confidence as well,” DiPierro said. “When you play with better people you get better as well and I think I got better from this experience.”

DiPierro tried out for the tournament as a catcher and shortstop and made the squad as one of the team’s infielders.

Offensively, DiPierro wasn’t satisfied with her performance but she made up for it on the defensive side.

“I did my best and I tried as best as I could. I played pretty well but I didn’t think it went as well as it could have,” she said. “I think I did better defensively. We made some pretty good plays and picked a couple of people off of second and I caught a couple of line drives.”

Mayfield coach Pat McKinley was one of the Northeast team’s coaches. The team finished 2-3.

Independence reloads for another run at CVC title