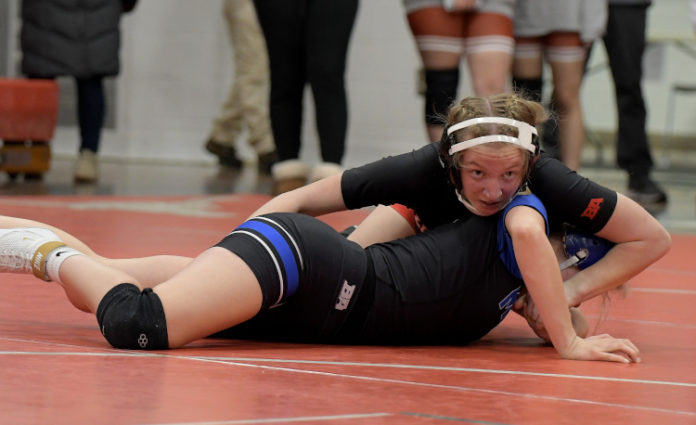 During one of the breaks in the action of the Girls Northeast District Tournament his school hosted on Feb. 14, Ressler sat in his mat-side chair and absorbed the reality of what was happening.

Four years earlier, he had promised one of Lutheran West’s newest students that he’d build a girls-only wrestling tournament and now that girl—senior Alyssa Pirro—is on the verge of winning a third straight state championship, and, at the same time, he helped to grow the girls’ wrestling movement across the state.

“She came in to watch one of our duals and we got to talk to her and her dad,” Ressler said of that discussion four years earlier. “I told her then, ‘I’m going to build a team around you. By the time you graduate, we’re going to have an all-girls wrestling team.’ I had no idea that we’d be able to host the district and have 80 girls in that district and a team of 17. It’s amazing. This process has been a lot of fun as well. It kind of helped rejuvenate me as a coach.”

Ressler, who has coached the boys’ team for 27 years, wasn’t exactly burned out, he’s always been one of the most passionate coaches on the high school level, but he has a newfound passion for providing girls with the same opportunities the boys have enjoyed over the years.

The plan kicked off in 2019 with the Ohio Athletic Committee’s all-girls state tournament.

“I went to my athletic director and I said, ‘Hey, I think girls’ wrestling is coming, let’s jump on this at the beginning,’ and asked if I could start a girls’ team just for that one tournament in March,” Ressler said. “I got the approval from him and our principal. We had six girls that year and wrestled in that one tournament. It was like an open tournament with a total of like 50 girls in the high school brackets.”

Shortly after that tournament, the Ohio High School Wrestling Coaches’ Association announced it would hold an all-girls state tournament in 2020.

That event was open to any girl who desired to compete. A total of 234 wrestlers participated, including eight Longhorns. Pirro won her second straight state title and her teammate, Alayna Lopez, placed third.

This year, the state tournament field includes 224 girls who had to earn their spot by placing among the top four in their respective weight classes at one of four district tournaments held across the state.

While the participation numbers have grown, the quality hasn’t suffered.

“You look at the wrestling on Sunday and there were some high-level matches,” Ressler said. “There was some really, really good wrestling going on. You were seeing throws and all the same technique that you’d see at a boys’ district. The numbers just aren’t as big yet but it’s going to keep growing and they’re going to get better and better.”

During his nearly three decades in coaching, Ressler has had a handful of girls who joined the boys’ team and did their best to compete.

That 2019 OAC tournament motivated Ressler to do his part to provide those girls with an opportunity to compete against each other.

Once the OHSWCA got involved, Ressler’s phone rang off the hook. Other coaches from around the state wanted advice on starting their own programs.

“They were all asking how we did it and what they could do and how they could start it,” he said.

This weekend, 104 different schools will be represented at the second OHSWCA girls’ state championships.

Ressler believes that number could grow exponentially if and when the Ohio High School Athletic Association officially sanctions the sport.

“There is going to be a lot more schools that will open up once they see that it is officially sanctioned,” he said. “I think there are still some schools out there holding back or are unsure about it or don’t want to take that next step until it has the full support of the OHSAA. I think we’re right there. We’ve done the things the OHSAA has asked for and the girls’ numbers are going to increase. There are a whole lot of sixth, seventh and eighth-graders wrestling, so those numbers are going to continue to rise.”

COVID created a bit of a speed bump for the sport this season.

Ressler had scheduled his team for several girls-only tournaments this winter only to see them canceled, including the one he had planned to run at Lutheran West.

“We kept advertising and we got 17 girls on the team this year,” he said. “Unfortunately, we were set to wrestle in seven girls-only tournaments and we were going to host one ourselves over Christmas break–the Lady Longhorn Holiday Tournament–but COVID canceled everything. Luckily, we’re going to have the state tournament and we had 11 girls who were able to compete last week (at districts) with eight making it to state.”

Lutheran West hopes to get the chance to run that tournament next season and Ressler is looking forward to the challenge of coaching both the boys’ and the girls’ teams.

“Girls, you coach them differently a little bit than you do boys. There are different quirks with it,” he said. “The moves are all the same and the technique is all taught the same, but they learn at different paces. Girls need to talk more and boys don’t so I’m learning a lot and it’s rejuvenating to me as a coach. I’m super excited for both teams. They feed off each other and we treat them as one team. The girls cheer on the boys, the boys cheer on the girls. We’ve had a few joint practices but we mostly run separate practices.”

Ressler will coach the girls this weekend at Hilliard Davidson High School and next week, he’ll be there when the boys kick off the postseason at the Independence sectional tournament.