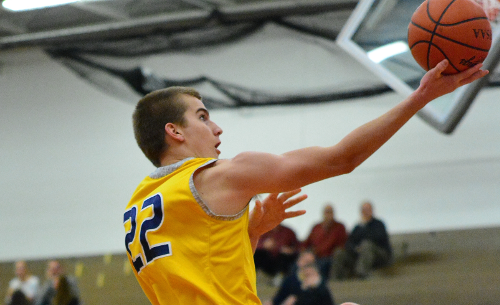 Kirtland came from behind in the fourth quarter then dominated the overtime period to defeat visiting Aurora, 50-45, on Friday.

“It was definitely sweaty palms time at the Hive last night,” said Kirtland coach Nick Gallo. “It was exciting. Aurora has some nice length in their frontcourt, which gave us some problems early but our kids just continued to fight.”

The Hornets, who improved to 5-4 on the year, battled back and David Allchin’s 3-pointer gave them the lead but regulation ended in a 39-39 tie.

“We did a nice job in the OT,” Gallo said. “We just continued to say we were going to force the basketball and continue with our transition offense. We did a good job in our press. I think we made them uncomfortable at times. To score 11 points in the OT is pretty solid.”

Madden, who played in just his fifth game after a long football season, continues to show improvement and now leads the team in scoring with 12.4 points per contest.

“He’s still trying to get his feet under him a little bit,” Gallo said. “He didn’t shoot the ball particularly well last night. I think he’s rushing it and the game may be a little fast for him right now because he’s only played like four games but I think he’s starting to play better. He got the ball inside a few times a little bit more last night. I think we’re going to try and do that with him more and have him play with his back to the basket. Being the athlete he is we’re going to continue to put him in different spots to succeed.”

Allchin finished with just six points but he was responsible for many more.

“Every time he touches it he’s a threat to get to the paint,” Gallo said. “He’s continued to come on for us off the bench and really gives us a huge spark. He hit a huge three in the fourth to give us the lead in the fourth quarter. Every big play last night and every time when we needed a play David Allchin was involved. Just an incredible game by him last night.”

The Hornets have a big week coming up with a home games against Chagrin Valley Conference rival Berkshire on Monday and a CVC Metro crossover game against Cuyahoga Heights on Friday.

“We’re sitting at 1-2 (in the conference),” Gallo said. “We have to look at both of these games as a must win. We have to come in prepared, ready to practice and understand that we have to play a full 32 minutes of basketball. We can’t take minutes off or quarters off. I think if we continue to get the defensive effort that we gave last night we’ll be in good shape.”