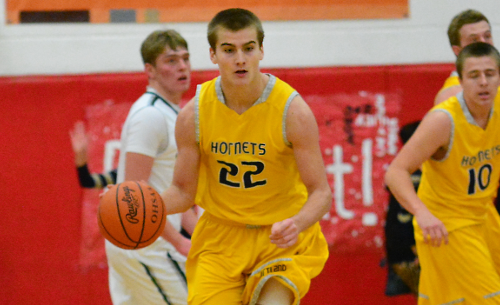 It isn’t often the opening act upstages the main event but that’s what happened on Saturday during the consolation game of the Mentor Hoops Holiday Tournament.

Led by 21 fourth quarter points from Evan Madden, Kirtland came from behind to defeat Riverside 70-65 as the fans were filling the gym for the championship game between the host Cardinals and neighborhood rival Lake Catholic.

“Everyone was piling in for the Lake Catholic-Mentor game and Evan Madden put on a different show for them,” said Kirtland coach Nick Gallo. “It was cool to see us get a big win against a Division I school.

Riverside held an 12-point lead over the Hornets heading into the fourth but Madden drained four 3-pointers and converted one into a 4-point play to give the Hornets a 67-65 lead with under a minute to play.

“It was an exciting finish for us,” Gallo said. “He was on fire; (he sank) everything he looked at. He had six triples and a couple clutch free throws down the stretch.”

Kirtland took control of the game early on strong play from Tommy Loncar, who scored 10 of his 14 points in the first quarter.

“Tommy Loncar played an excellent first quarter for us,” Gallo said. “When he’s engaged and when he’s focused on finishing strong around the basket he’s a much better basketball player than people give him credit for. He needs to continue to give energy from the tip and be that force for us inside.”

Riverside stormed back to cut Kirtland’s lead to 30-29 at halftime.

The Beavers were up 32-29 with two minutes left in the third then broke it open midway through the fourth and led by 11 with four minutes to play.

The Hornets, who improved to 4-2, never panicked.

David Allchin, who stepped in at point guard for the injured Matt Grazia, steadied the offense to set the stage for Madden’s heroics.

“David Allchin, with the circumstances whatever they are with Grazia going down, I thought he did a decent job of managing the basketball game tonight,” Gallo said. “To have him come in, he’s coming off an injury too, only has played two games for us, he sort of dictated tempo for us offensively and was a floor leader for us. He did a really nice job. He’s going to have to continue to do that for as long as Matt is going to be out. He played a big role for us tonight.”

The Hornets responded with a strong finish.

“The team kind of woke up,” he said. “We put on a little bit of a run and jump press to get back in the game. It was an 11 point game with about four minutes to go and these guys, there’s just a resiliency about them. Even though we play a bad 8-10 minutes we turn it around and find a way to get the job done.”

“After a disappointing game against Lake Catholic, he knows a lot of those Lake Catholic guys, he had a couple of huge triples in the fourth for us too,” Gallo said. “For us to score 31 in the fourth and come back he stepped in with confidence and knocked down some big shots.”