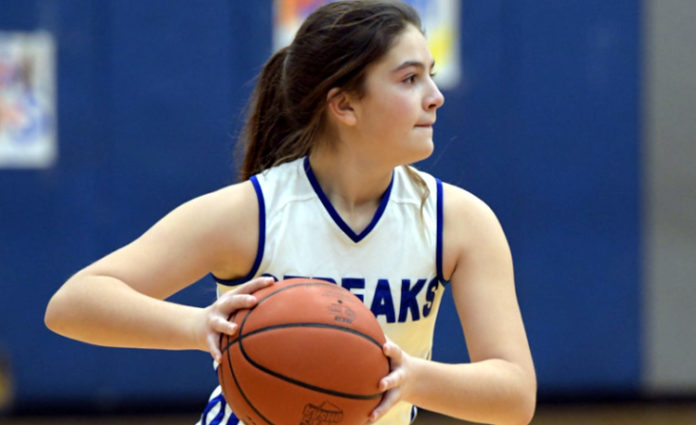 After two weeks off, Madison came up short in a 66-58 non-conference loss to visiting Hudson on Thursday.

The Blue Streaks, who last played on Jan. 30, jumped out to a 21-6 first-quarter lead but couldn’t sustain that success.

“We came out without practicing in a long time and had a good shootaround before the game,” said Madison coach Tedd Wagner. “We came out hot but they really ratcheted up the pressure. We pressured too. It was a very fast-paced game, back and forth, with both teams pressing and trapping. It was a fun game to be in and to watch.”

Madison opened its season on Jan. 11 but played just nine games before the school entered a COVID-related shutdown.

With their postseason opener scheduled against Austintown-Fitch on Saturday, the Blue Streaks opted to play a game on their first day back rather than practice.

Hudson was in the same situation.

“We kind of figured the best thing for both of us going into the tournament that a game would be better than practice,” Wagner said. “I think playing a game you always learn more things than you do in a practice. Hudson did some things–we both went into the game a little bit blind as we didn’t have a lot of time for scouting–but they threw a lot of stuff at us and I think we adapted well and learned a lot. I would have rather learned from a win but I told the girls we learned from this and that will help us on Saturday.”

She drained a pair of 3-pointers and finished the quarter with eight points. Five other Blue Streaks also scored in the quarter.

“(It was) excitement and adrenaline,” Montagner said of the early success. “Being back on the court together helped us come out strong. We were really excited and couldn’t wait to get back at it. It felt more like two months rather than two weeks. Unfortunately, there were points in the game where you could tell we were away from the gym.”

Hudson bounced back in the second quarter and outscored the Blue Streaks by 13 to cut Madison’s halftime lead to 33-31.

The Explorers continued to score in the third quarter and took a 49-41 lead into the fourth and the Blue Streaks never recovered.

Now, Madison will have one practice to correct their mistakes before opening the playoffs on Saturday.

“Going into Fitch, we learned we’ve got to make sure we play for 32 minutes and rebound for 32 minutes,” Wagner said. “We have to handle the pressure and execute a little bit better, but for not playing for two weeks, I thought the girls played hard and we attacked. We didn’t back down one bit. I’m very happy about that.”

Despite the loss, Montagner and her teammates are confident they’re ready for Saturday’s sectional semifinal.

“The biggest thing was being back together as a group and getting back up to speed after a break,” she said. “We know it’s going to be tough for us but we definitely benefited from a game as opposed to scrimmaging and drills.”