Madison makes up for lost time 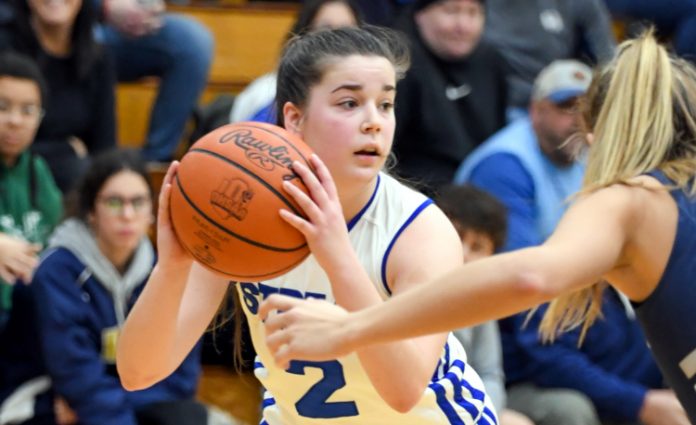 Between COVID, water main breaks, and school closings due to TikTok threats, Madison’s girls’ basketball team has had four games canceled this season.

The Blue Streaks made the most of their opportunity to play on Wednesday as they downed visiting Lakeside in a non-conference game, 73-26.

“The girls were very anxious to play,” said Madison coach Tedd Wagner. “I think we were sick and practicing, but a lot of the things that we have been practicing, they showed tonight. We were focused on three or four things and I think we showed those tonight, so that was a good thing.”

Madison, who improved to 4-4 overall, wasted little time taking control of the game.

Riley Montagner scored 12 of her game-high 15 points in the first quarter and Payton Lewanski added eight of her 12 in the first period as the Blue Streaks built a 38-5 lead.

Chloe Bancroft scored all eight of her points in the opening period and four other Blue Streaks scored during the game-opening run.

“They came out in a zone and luckily we came out hot,” Wagner said. “We hit three or four 3-pointers in the first two or three minutes, so they had to abandon their zone pretty quickly. It was nice to shoot well. We’ve been working on shooting a lot and the girls were relaxed. Riley came in two and a half hours before the JV game and put up 600 shots and a lot of the other girls were there and shot for over an hour. They put the time in and it was nice to see their efforts pay off.”

Madison’s offense slowed down in the second half but the Blue Streaks’ remained stingy on defense and outscored the Dragons the rest of the way, 35-21.

Chloe Wakim added 10 points and Kearsten Woleben and Bancroft both contributed with eight.

Wakim missed the preseason and several early games as she worked her way back into the lineup after suffering an ankle injury.

“That was kind of our goal,” Wagner said of Wakim’s limited participation early in the season. “We didn’t want to rush her. We wanted to bring her along slowly and she played a lot of JV to try to get her minutes up and get the rust off. She didn’t do anything from like September to December, so her game was a little bit rusty but she’s a very talented young lady and she can affect the game in a variety of ways.”

Wakim was excited to find her rhythm on Wednesday.

“Coming back off of three months of being out for an injury was extremely exciting for me,” she said. “I have always loved playing the sport and being able to come back with a solid game like this made it that much more enjoyable.”

During her time off the court, Wakim worked hard to prepare for the moment when she dive back into the varsity rotation.

It was hard, mentally and physically, but her teammates provided her with moral support and now with a big game under her belt, she’s ready to contribute even more in the future.

“A game like tonight’s was a huge builder for my confidence,” Wakim said. “Prior to the game, Coach Wagner told me to be ready to get some more minutes and take on a bigger role. Tonight, my team had a dominant performance and it felt good to contribute to that. Being able to get some rebounds and put up 10 points tonight gives me more confidence to compete and drive to the hoop. This makes me excited to see what more I can accomplish this season.”