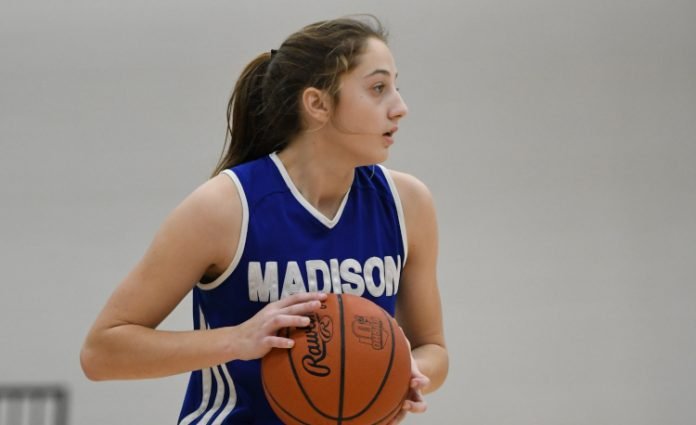 Claire Wakim and Riley Montagner both hit key shots to lead Madison to a 63-60 double-overtime win at Mayfield on Monday.

Wakim drained a free throw with seconds remaining in regulation to force the first overtime and Montagner buried a 3-pointer late in double overtime to seal Madison’s win.

“In the fourth quarter, we were down six or eight points and I called a timeout,” said Madison coach Tedd Wagner. “I said, ‘Listen, we’re down eight with two minutes to go and you guys usually play like maniacs when we’re down late, so let’s start that now. That was probably the most focused we’ve been and we executed down the stretch of regulation and in overtime.”

Mayfield led 28-23 at halftime and took a lead into the fourth quarter.

Wakim stepped to the free throw line with four seconds remaining in regulation and Mayfield holding a one-point lead. She had missed two free throws earlier in the game and added some pressure for herself after missing the first in the final seconds.

“Claire got a rebound and got fouled,” Wagner said. “She had struggled at the line so that was a huge free throw she made.”

Madison and Mayfield each scored six points in the first overtime and Montagner put the pressure on the Wildcats when she hit her 3 and a pair of free throws in the second overtime.

Mayfield heaved up a 3-pointer at the buzzer but it missed the mark.

“I told the girls after the game, you lose games in three different ways,” said Mayfield coach Cullen Harris. “One, the other team is just better than you; two, you just play awful, and three, you play a good team and you’re a good team but you go back and forth and a couple of bounces don’t go your way. That’s what happened tonight. Give Madison credit, they hit shots when it mattered and forced turnovers, and made their free throws down the stretch. That’s basketball. We’re happy with our effort and how we played and competed.”

Montagner led all scorers with 27 points, Bottar and Wakim both contributed to the win with 11 points, and Kearsten Woleben and Chloe Bancroft both finished with five points. Payton Lewanski added four for the Blue Streaks, who improved to 10-10 overall.