Madison turns up pressure in win at Lake Catholic 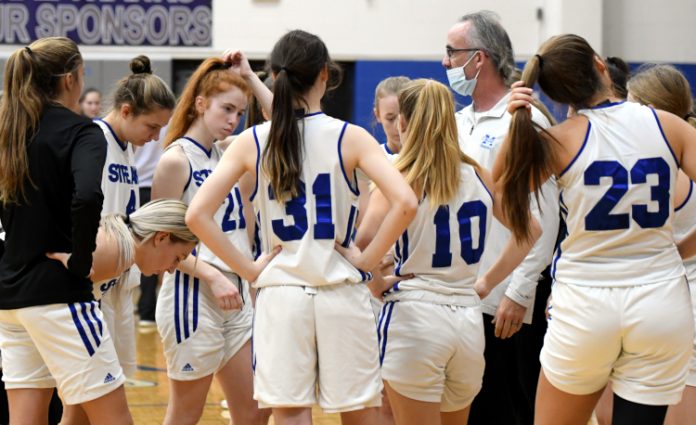 Scouting paid off for Madison in a 59-46 non-conference win over host Lake Catholic on Thursday.

The Blue Streaks, who improved to 6-4, followed a similar strategy to the one Mentor used in a win over the Cougars on Tuesday.

“In the first quarter, we couldn’t do anything,” said Madison coach Tedd Wagner. “Early in the second we were down 17-10 and I had watched the Mentor-Lake Catholic game and Mentor really pressured them, which of course plays right into our strength.”

Lake Catholic held a 12-8 advantage after the first quarter and maintained that lead until midway in the second when the Blue Streaks found their footing.

“Our press was doing nothing and then all of a sudden in the second quarter, it’s like a light switch went on,” Wagner said. “The next thing I know, I looked up and it was like a 20-4 run and our press was very aggressive. We had a lot of aggressive traps and that turned into a lot of easy layups, so that really swung the tide.”

Madison outscored Lake Catholic in the second quarter, 23-8, and led at halftime, 31-20.

The Cougars turned the table in the third quarter and pulled to within 38-34 heading into the fourth.

“We were up 15 and all of a sudden our press just stopped working and they made some shots and went on a run,” Wagner said. “In the fourth quarter, we turned it up again a notch.”

Riley Montagner scored seven of her game-high 20 points in the fourth quarter and Chloe Bancroft added nine of her 12 in the period as the Blue Streaks sealed their win.

“Bancroft had a great fourth quarter with nine points and Montagner had seven points and our pressure got to them again,” Wagner said. “I just can’t figure out why we couldn’t put four quarters together.”

Chloe Woleben also scored in double figures with 10 points, but her effort on defense was unmatched.

“My family was there and they all said she played amazing,” Wagner said. “She had to have at least six or eight steals. She was just everywhere on the press. She played amazing on defense.”

The Blue Streaks, who now have won three straight games, open the New Year with a challenging slate of conference games beginning with a home contest against South on Wednesday.

“The next three games are huge,” Wagner said. “I think everyone knows the league is pretty balanced and we have South, North, and Riverside, so I think that’s going to make or break our season. If we can get three wins there, which is not easy at all, that really puts us in good shape. I think we just need to work on being a little more consistent and we also have to figure out how to play successful basketball when we are not pressuring teams. Those three teams are extremely well-coached and they know us, so they’re going to be ready for our press. If it’s not working, we have to be able to go to Plan B and still be successful.”

Madison rallies for win over Geneva